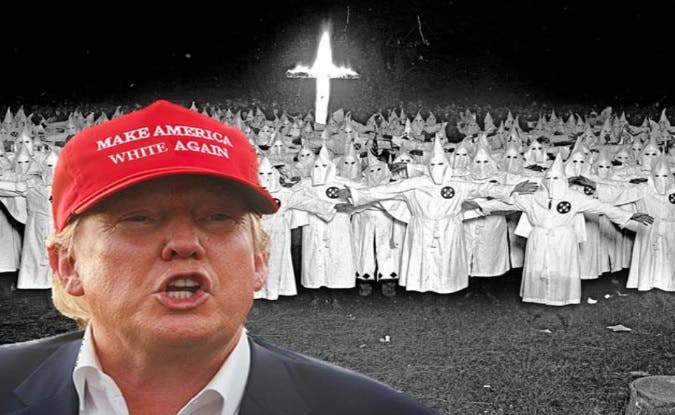 As CBS anchor Scott Pelley once observed to Republican presidential nominee Donald Trump’s face during an interview, “You love hearing about yourself. It is oxygen to you.” Trump responded in his typical braggart manner that he has been on the cover of more publications than any supermodel and that he enjoys hanging the covers on his office wall as trophies because they are “cheaper than wallpaper.” Cheap and tacky, that’s quintessential Trump.

However, Trump likely won’t be adorning his wall with the latest edition of “The Crusader“, the official newspaper of the Ku Klux Klan, who just put Trump on their cover with a glowing endorsement of his candidacy with a promise of a resurgence of white supremacy. The publication, in part, wrote:

“Make America Great Again!” It is a slogan that has been repeatedly used by Donald Trump in his campaign for the presidency. You can see it on the shirts, buttons, posters and ball caps such as the one being worn here by Trump speaking at a recent rally…But can it happen? Can America really be great again? This is what we will soon found out! While Trump wants to make America great again, we have to ask ourselves, “What made America great in the first place?” The short answer to that is simple. America was great not because of what our forefathers did — but because of who are forefathers were, America was founded as a White Christian Republic. And as a White Christian Republic it became great.

The Trump campaign will likely not accept The Crusader’s endorsement, but considering Trump’s plummeting poll numbers anything is possible. However, that does not mean the Trump campaign is going to repudiate The Crusader, or the KKK, either. We know this based on how Trump has treated his racist sycophants in the past. In February 2016 when Trump was asked about the endorsement he received from David Duke, the former Imperial Wizard of the KKK, Trump said, “I don’t know anything about what you’re even talking about with white supremacy or white supremacist. So I don’t know. I don’t know.” Trump continued, “I know nothing about David Duke; I know nothing about white supremacists.”

Relive that precious moment below:

Those comments sparked outrage and days later Trump blamed his answer on technical difficulties by saying, “I was sitting in a house in Florida, with a bad earpiece.” Right.

To believe Trump isn’t in cahoots with white supremacists is not in line with reality. For example Trump has personally rewtweeted at least 75 posts directly from other white supremacists. The Republican party’s leadership accepts the white supremacist support for their standard bearer and during Trump’s acceptance speech of the GOP nomination at the Republican National Convention they put the Twitter comments of a known racist on four large screens in the arena for all to see.

Trump even accepted one of America’s most famous racists, William Johnson, as an official delegate in California. Johnson is the leader of the American Freedom Party which, “exists to represent the political interests of White Americans.” To bring up David Duke again, the former KKK leader has credited Trump for increasing his chances at winning a vacant U.S. Senate seat in Louisiana. Duke said, “The fact that Donald Trump’s doing so well, it proves that I’m winning. I am winning.” Curiously, Duke, who has made a living out of hating black people, has about double the support of black voters than Trump does!

MSNBC pointed out that this portion of voters “could be a wild card for Trump in general election.” The threat of the white supremacist, alt-right, pro-nazi, fascist voting bloc is not to be taken lightly. Considering Trump has alienated every minority community he only has ignorant, hateful, and afraid white people left to count upon.

Add your name to call on prosecutors to ARREST DONALD TRUMP for his crimes!Advertisements
Tags
KKK style Trump