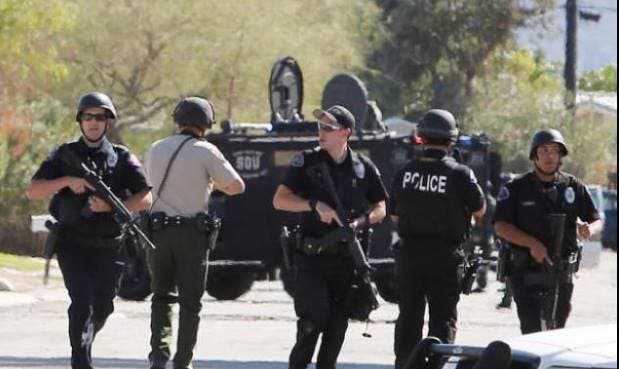 A typical school day came to a close at a San Francisco high school when gunshots rang out in the school’s parking lot that has left numerous teens injured with at least one fighting for their life.

The shooting took place in the Excelsior District on the dual campus of both the City Arts and Tech Highschool and the June Jordan School for Equity. Four students have been confirmed shot, three males and one female, with the female student sustaining life-threatening injuries. Due to their age none of the student’s names are being released.

San Francisco Police say there were at least four perpetrators observed fleeing the scene, and they believe one of the students who was shot was the intended target of the shooting, without offering further elaboration.

As soon as the shooting began students fled back into the school in what was described as a “stampede”, and police officials originally believed a shooter may have still been hiding inside the building. However, after a thorough search of every room of both facilities they confirmed they did not locate a shooter or a weapon.

Considering the shooting took place at a high school it is reasonable to speculate the shooters, who are all still at large, were also minors. California has some of the toughest gun restriction laws in the United States and sales of shotguns are prohibited to those under the age of 18, and handguns to those under the age of 21. The shooters likely did not acquire their weapons through legal means.

Republicans, particularly their presidential nominee Donald Trump, are steadfastly against any form of gun regulation. Trump recently released an attack ad against Democratic presidential nominee Hillary Clinton stating she would “take your guns” if she wins the Oval Office in November. The fact remains that gun sales have increased 158% since President Barack Obama took office and around 52,000 new guns are sold within the United States every single day.

Such ignorance to the facts is part and parcel of the Republican party’s platform, with many of its charter members echoing similar sentiments. Conservative hero Samuel “Joe The Plumber” Wurzelbacher once said, “Your dead kids don’t trump my constitutional rights.” If an innocent teenage girl who was simply exiting school and on her way home dies after today’s vicious attack, Mr. Wurzelbacher and Mr. Trump, along with all other conservatives who resist gun regulation which would prevent these types of atrocities, will continue to have blood on their hands.