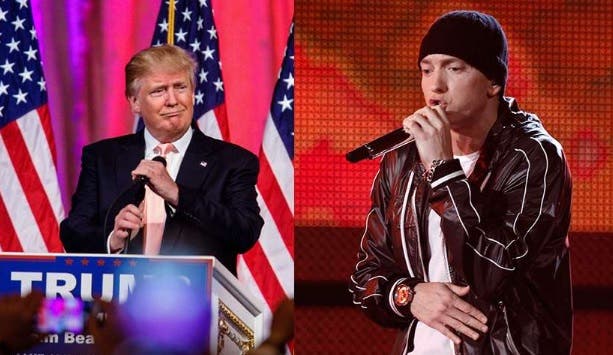 Gov. Pat McCrory: It’s Not My Fault, Liberals Made Me Pass The Bathroom Bill!

World-famous rapper Marshall “Eminem” Mathers took aim at Republican nominee Trump in a verse during a seven-minute freestyle called “Campaign Speech” which was released today. Mathers has been controversial for his entire career for his offensive lyrics and for pressing the boundaries of free speech – but that actually gives him an interesting platform to which to judge Trump, juxtaposing Eminem’s freewheeling desire to offend everyone for the sake of it against Trump’s targeted and discriminatory attacks that advocate an agenda of white supremacy.

The verse is as follows:

“Consider me a dangerous man/ But you should be afraid of this dang candidate/ You say Trump don’t kiss ass like a puppet?/ ‘Cause he runs his campaign with his own cash for the funding?/ And that’s what you wanted?/ A f*ckin’ loose cannon who’s blunt with his hand on the button/ Who doesn’t have to answer to no one?/ Great idea!”

Listen to it here. The verse begins at 3:45, but we will warn you that while the rest of the song is an extremely impressive show of lyricism, it is very graphic and certainly should not be played at work or in front of children: