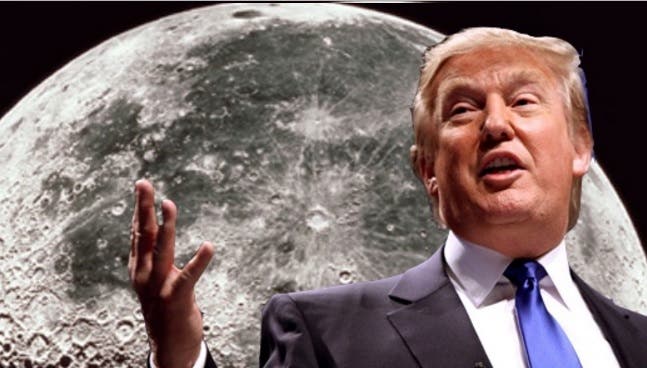 Donald J. Trump’s campaign has worked closely throughout the Republican campaign with notorious political slime machine Roger J. Stone, whose early knowledge of the contents of hacked emails from the Democratic campaign has already produced a serious FBI complaint by the Democratic Coalition Against Trump. Now, one of Stone’s 2013 tweets has surfaced showing precisely how fringe the political operative’s beliefs truly are, because he actually thinks that the 1969 moon landing… was filmed in a New Jersey warehouse.

“Look, to say that elections are rigged and all these votes are stolen, that’s like saying we never landed on the moon, frankly. That’s how silly it is,” added Kasich, who noted that his first statewide election was “extremely close.”

In 2009 the New York Times cited polling that 6 percent of Americans, like Stone, also believe in the completely unbelievable idea that the moon landing was a hoax, even though the Russians also landed on the moon and the astronauts brought back physical evidence of their trip!

“Roger Stone lies so much,” said former New York gubernatorial candidate Warren Redlich who is suing Stone in state court for defamation for lying about him in that race, “that he doesn’t even know when he’s lying.” It will not come as a surprise that Stone has written a book, the Clinton’s War On Women, that is dedicated to a Holocaust denier who believes that 9/11 was “done by the Jews.”

Nevertheless, Donald Trump relies on lunatics like Roger J. Stone for advice to make false claims of election rigging, because otherwise he’d have to admit after losing, that most Americans are wise to the shameless con he’s perpetrating on the voting public. Lest anyone forget, the Trump campaign also relies heavily for advice on “Moon President” Newt Gingrich, whose failed moon colony in 2012, sunk what was left of the thrice-divorced, disgraced House Speaker’s political career.

It’s no wonder that Donald Trump’s failing Republican campaign peddles more crazy conspiracy theories, than practical ideas besides bigotry and discrimination. Trump’s political advisors are so crazy, it’s no wonder polls say that he’s going to lose the votes college educated white men for the first time by a Republican nominee, in a generation.