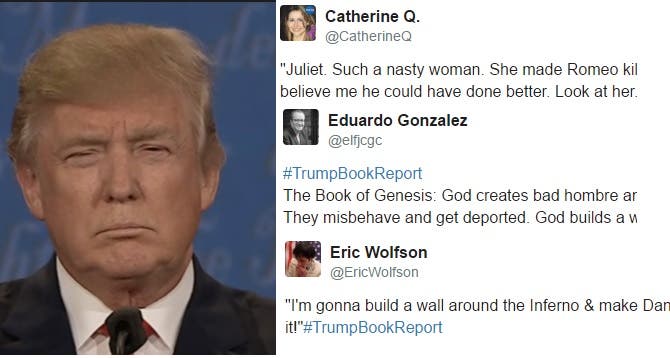 Trump: I’ll Accept The Results Of The Election ONLY If I Win

Progressive firebrand Antonio French wrote one tremendously viral tweet, that spawned a twitter-wide joke at Donald Trump’s expense after the Republican nominee bombed every substantive question at last night’s third and final presidential debate. French is an Alderman in St. Louis, who rose to national prominence after the Ferguson protests, was a faithful Bernie Sanders supporter and currently running for Mayor. Here’s how French touched off the #TrumpBookReports firestorm:

Trump's foreign policy answers sound like a book report from a teenager who hasn't read the book. "Oh, the grapes! They had so much wrath!"

Ironically, Trump’s more subdued style gave viewers the space to notice precisely what Antonio French noticed; the Republican doesn’t grasp substance whatsoever, hence his constant verbal gymnastics. Now the candidate who has lived by the tweet (often at 3am), is dying by the tweet storm in the very most public way, and the LOLs are flowing fast.

Here’s a sampling of the best ones:

I did not finish "Pride and Prejudice" because the title made me think it was about me, but it lied. #TrumpBookReport

"Juliet. Such a nasty woman. She made Romeo kill himself. And believe me he could have done better. Look at her." #TrumpBookReport

"When District 12 sends its people, they’re not sending their best. They're sending Katniss Everdeen. What a nasty woman."#TrumpBookReport

A great many twitter users mocked Trump’s fantasies about walls and rants about open borders, which Democratic nominee Hillary Clinton zinged at last night’s debate when she said the Republican “choked” after his failed visit to Mexico’s President, which spawned an international twitter beef.

All I'm saying is, one would not have flown over my cuckoo's nest, okay? Because I'd build a wall. A tremendous wall. #TrumpBookReport

#TrumpBookReport
The Book of Genesis: God creates bad hombre and nasty woman. They misbehave and get deported. God builds a wall.

"I'm gonna build a wall around the Inferno & make Dante pay for it!"#TrumpBookReport

No topic was spared. Some twitter users shouted out stories where Trump looks like he’s holding a book report, others stuck with the classics.

To Kill a Mockingbird? Nobody kills Mockingbirds better than me. I will kill the families of Mockingbirds. Believe me. #TrumpBookReport

“We’re gonna catch so much rye, you won’t believe it. We’re bringing those rye catching jobs to America.” #TrumpBookReport @AntonioFrench

Pinocchio? He's no puppet. No puppet. You're the puppet! #TrumpBookReport

For my birthday today all I want is for all Anti-Trump people that exist to RT this #nastywomenvote #trumpbookreport https://t.co/CPIes3jWZd

From the classics to the only smash hit novel written entirely on a Blackberry, nothing was spared.

Gatsby? He says he was great. I don't know. People are saying maybe not so great. I'll make Gatsby great again. #trumpbookreport

Donald Trump has relied on his massive Twitter following to broadcast messages directly to his faithful followers, but the size of his audience is dwarfed by the epic size of the twitterverse and the twitterverse has clearly turned against the Republican nominee after last night’s final debate.