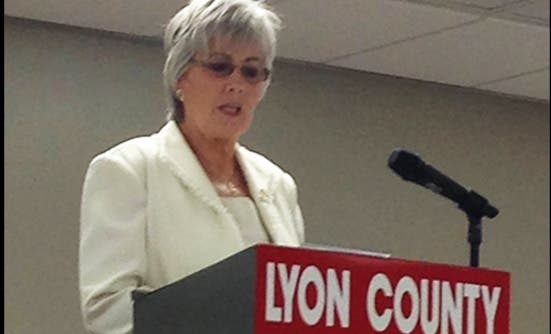 Republicans are now positively referencing Hitler. The crumbling party is not hiding their reverence of the Fuhrer; after all, his fascist ideals align with much of what they stand for.

“Great quote from Hitler in the video,” the No. 3 Republican in the Kansas House, Speaker Pro Tem Peggy Mast, R-Emporia posted on her Facebook page on Thursday. “Please listen to it closely. His words are profound! Let’s start using discernment.”

The Hitler quote she felt was “profound” was ambiguous as she forgot to post the video. However, an hour later she clarified by posting a link to an article on Christian blog, JulieRoys.com, which included a video of anti-abortion activist Gianna Jessen speaking in front of Congress and quoting Hitler, comparing his tactics to that of Planned Parenthood (as though Mein Kampf was about cancer screening).

The Hitler quote is as follows:

“The receptivity of the masses is very limited, their intelligence is small, but their power of forgetting is enormous. In consequence of these facts, all effective propaganda must be limited to a very few points and must harp on these in slogans until the last member of the public understands what you want him to understand by your slogan.”

Mast tried to back peddle on her usage of the quote, but it was too little, too late.

Rabbi Moti Rieber, Executive Director of Kansas Interfaith Action, stood-up against Mast’s comment saying, “There’s nothing profound, and there’s no room in American politics for the words or thought of Adolph Hitler,” continued his statement. “I hope Rep. Mast will clarify her thinking at the earliest opportunity.”

Mast is not running for re-election, which is good considering the last things the Republicans need is another open fascist.