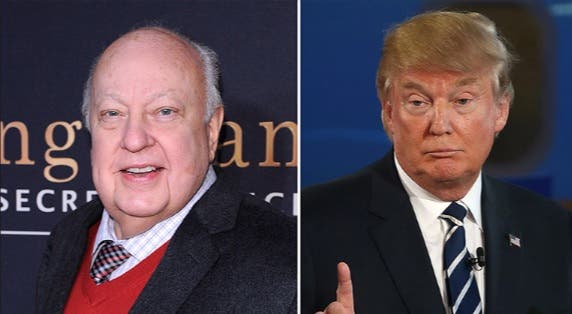 Donald Trump just lost an integral part of his Republican campaign’s cabal of evil advisers. In a stunning chain of events, disgraced Fox News propagandist-in-chief Roger Ailes has fallen out entirely with the short-fingered candidate and has left the campaign. Vanity Fair’s Emily Jane Fox has been carefully carving apart the tattered remains of Roger Ailes’ legacy, which evolved rapidly this summer from creating a news channel built around lying into that of a sexual predator who built a news channel around lying and reported the scoop:

As New York magazine’s Gabriel Sherman revealed on stage at the Vanity Fair New Establishment Summit on Wednesday morning, Trump has lost one key ally: Roger Ailes. The former Fox News boss had reportedly served as an advisor to Trump throughout the campaign. He was said to have played a particularly important role as of late, helping him prepare for the presidential debates.

For once, we can all agree with Ailes; preparing this year’s Republican nominee for anything more complicated than reading from a teleprompter is a waste of time. Tony Schwartz, the ghostwriter who authored Trump’s The Art of the Deal summed up the situation best to ABC News when he said, “My two-year-old grandson has a longer attention span than Donald Trump.”

It’s still unclear precisely how Donald Trump’s campaign expected to benefit at all from having Roger Ailes on the scene, inasmuch as he was already reviled by American women as one of the GOP’s perennial generals in the party’s “war on women,” having lost his job at FOX due to a wave of sexual assault allegations – much like Donald Trump is about to lose his.

Perhaps this is just another dodge by the flailing Republican campaign to lower expectations ahead of tonight’s third and final debate after Trump horridly bombed his first encounter with Democratic nominee Hillary Clinton, and then turned in an even more mortifying – universally acclaimed as third-world dictator-esqe – performance in the second debate. The Republican’s campaign accused Ailes of pointlessly rehashing “war stories” which is Trump-speak for the candidate’s innate disdain to learn from the lessons of anyone else’s mistakes.

It’s a terrible sign for the Republican’s campaign and what to expect at tonight’s third and blessedly final debate when Trump’s debate coach – who happens to be his party’s top politico for a generation and fellow sexual abuser – think’s its all so pointless that he doesn’t want his name futher associated with failure, three weeks before a general election.

Expect a meltdown from the unchained Donald Trump tonight, because every time we’ve thought that the Republican cannot get any worse, he lowers the bar. Lacking his fellow sexual predator’s help to lie effectively, it’s going to get really ugly.