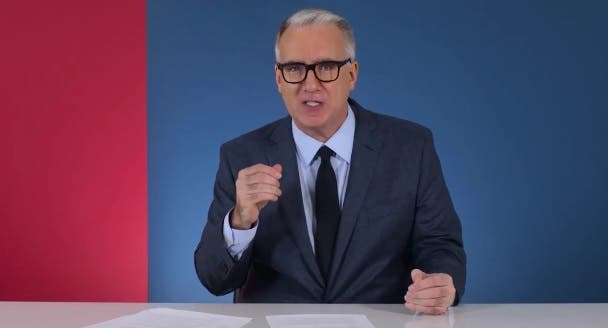 Trump’s threat to deny the outcome of the election if he is not pronounced the winner is not just narcissistic ramblings, but a staggering threat to our electoral system and the nation as we know it. It is enough to make even the typically cool, calm and collected, Keith Olbermann, GQ Special Correspondent, respond with a rarely captured passion.

Olbermann speaks for all of us, saying exactly how he feels about Trump’s disgusting threats to blatantly disregard the voters and electoral college on Nov. 8th, as though he is above the law and can choose to ignore the results of the election.

No, Trump you are not our dictator, nor will you ever be.

Olberman begins with Trump’s claim that he will refuse to accept the election results saying, “It was the first time in American history, through dozens of venomous painful campaigns and a series of impossibly close elections, the first and only time that a candidate of a major party had violated the fundamental precept of our democracy,” he explains. “It shakes every one of our freedoms, it mocks every dead American soldier, it spits in every sacrifice made under our flag.”

His fury elevates, continuing, “This time it slipped passed no one. Not the moderator, not Fox News, not even Breitbart.com. It was not a flash of anger from a man who gets angry once an hour. It was not another slab of red meat thrown to his crazed supporters. It was not another outrageous statement to throw up against the wall in this cheap reality show version of a presidential campaign. He meant it! He means it!”

Finally, Olbermann issues a call to action, asking the Republican Party to force Trump to step down, before he causes to any further affronts on our governmental system.

“Compel him to withdraw! Now!” Olbermann urges. “Litigate against him, find enough doctors and have him declared psychiatrically incompetent. At minimum, cut off his funding completely and denounce him in the strongest possible terms because this nightmare, this fascist, this Trump is now your responsibility.”

NEW: after he again subverts the sanctity of our elections, my message to @realDonaldTrump: Burn. In. Hell. pic.twitter.com/q2gvPAgq9P