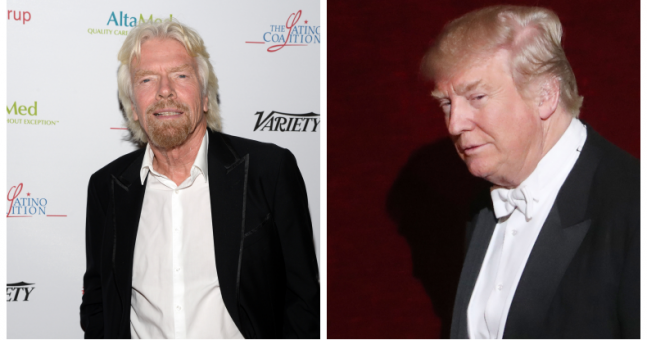 Richard Branson has become the latest billionaire to weigh in on the Republican nominee’s bizarre behavior and unfitness to become President. The founder of the Virgin conglomerate, including Virgin airlines, Virgin mobile and others is the real billionaire, with a success story of rags to riches that trust-fund baby Trump wishes he had. When Trump extended Branson an invitation, the mogul accepted because he wanted to find out what was under the public persona of the brash New York developer.

What Branson learned shocked him; Donald Trump invited him to lunch just to talk about his multiple bankruptcies and the five people he blamed for not helping him as his Atlantic City casino empire went into ruins. That lunch with Trump definitely left an impression on Richard Branson, and he shared it for the first time today in a blogpost, where he contrasted that experience with meeting Democratic nominee Hillary Clinton:

I left the lunch feeling disturbed and saddened by what I’d heard. There are a lot of frightening things about this election; not least that policy has been pushed so far down the agenda. What concerns me most, based upon my personal experiences with Donald Trump, is his vindictive streak, which could be so dangerous if he got into the White House. For somebody who is running to be the leader of the free world to be so wrapped up in himself, rather than concerned with global issues, is very worrying.

Some years ago, Mr Trump invited me to lunch for a one-to-one meeting at his apartment in Manhattan. We had not met before and I accepted. Even before the starters arrived he began telling me about how he had asked a number of people for help after his latest bankruptcy and how five of them were unwilling to help. He told me he was going to spend the rest of his life destroying these five people.

He didn’t speak about anything else and I found it very bizarre. I told him I didn’t think it was the best way of spending his life. I said it was going to eat him up, and do more damage to him than them. There must be more constructive ways to spend the rest of your life. (Hopefully my advice didn’t lead to him running for President!)  I was baffled why he had invited me to lunch solely to tell me this. For a moment, I even wondered if he was going to ask me for financial help. If he had, I would have become the sixth person on his list!

Psychology today noted that people who score higher in the trait of narcissism – plainly the driving ethos of the Trump Train – tend to lash out after failure, even seeking to harm innocent people, and said, “In other words, someone who believes they are brilliant is not going to react well to finding out they’re not.”

Branson’s lunch with Hillary Clinton could not be more diametrically different than his bizarre meal with Trump:

Later, I remember contrasting the lunch with a one-to-one lunch I shared with Hillary Clinton. Here we talked about education reform, the war on drugs, women’s rights, conflicts around the globe and the death penalty. She was a good listener as well as an eloquent speaker. As she understands well, the President of the United States needs to understand and be engaged with wider world issues, rather than be consumed by petty personal quarrels.

Richard Branson’s anecdote is striking, because it reveals that Republican nominee Donald Trump is so callous, he didn’t bother to guard the words of his unlimited fantasy of revenge from a fellow billionaire in their very first meeting.

No wonder Branson left the room worried that The Donald would beg him for cash in a pinch, and then put him onto the litigious Trump Organization’s enemies list.

We couldn’t agree with his conclusion more: America deserves a President whose driving motivation is not revenge against his many personal enemies.