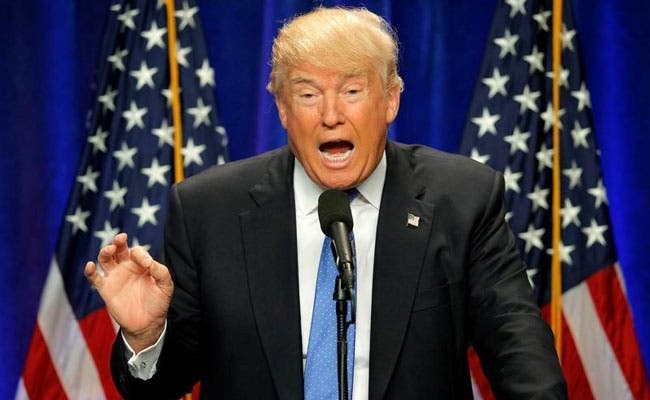 Donald Trump, the cartoon villain Republican presidential nominee, just vowed to sue every woman who has accused him of sexual assault and sexual harassment. It is scorched for them, according to Trump, who will leave no stone unturned in his quest to be remembered as the most despicable political figure in American history.

While speaking in Gettysburg, Pennsylvania, which was fitting and ironic as Gettysburg is the site of the bloodiest battle of the American civil war, Trump made an announcement vowing his own form of bloodshed regarding the numerous women who have come forward with various accusations of wrongdoing against him:

Every woman lied when they came forward to hurt my campaign. Total fabrication. The events ever happened. Never. All of these liars will be sued after the election is over.

The failed businessman uses the threat of litigation against those with whom he does not like, but it is often a bluff. For example Trump made a toothless threat to sue the New York Times after they published stories of sexual allegations against him. However, Trump has followed through enough times to make his threats worth paying attention to. In August after the story broke about Trump’s wife, Melania, and the possibility of her working as an escort, actual action was taken against numerous outlets. Those outlets succumbed to the threats and issued retractions and removed elements of their stories. At the same time Trump’s brood threatened to sue People Magazine just a week ago over Melania being implicated in a story, and they’ve not yet followed through. As with all of Trump and his campaign, consistency is not his forte.

In attempting to shift blame from himself, Trump presented the ludicrous idea that it was the campaign of Democratic presidential nominee Hillary Clinton who enticed the women to come forward, “It was probably the Democratic National Committee and Hillary’s campaign who put forward these liars with their fabricated stories. But we’ll probably find out later through litigation, which we’re so looking forward to.”

Trump’s argument is bizarre and not in line with reality. It is inconceivable and strategically impossible to have aligned all of his accusers, over a span of 40 years, to all tell the same story about him. When every person is telling the same story, including a decorated journalist with a vivid account of Trump’s assault, it makes far more sense to believe the group. These are not isolated incidents, but codified examples of Trump’s disgusting pathology that has been allowed to fester for decades.

Hillary Clinton’s campaign has responded to Trump’s pathetic threats to financially damage the women brave enough to speak out againsthim. Clinton’s campaign spokeswoman, Christina Reynolds, said, “Today, in what was billed as a major closing argument speech, Trump’s major new policy was to promise political and legal retribution against the women who have accused him of groping them. Like Trump’s campaign, this speech gave us a troubling view as to what a Trump State of the Union would sound like; rambling, unfocused, full of conspiracy theories and attacks on the media, and lacking in any real answers for American families.”

The plan by the Trump campaign is twofold. They seek to perform damage control by painting all individuals with accusations against him as liars, and to use the threat of litigation as a preemptive strike against women who may come forward against him in the future. None of the women who have come forward are wealthy, and if Trump does follow through with litigation they will surely require assistance to stand against Trump and his high-powered legal team. The truth is not always comfortable, or easy. It often requires personal risk, and these victims of Trump are learning that unfortunate fact first hand.