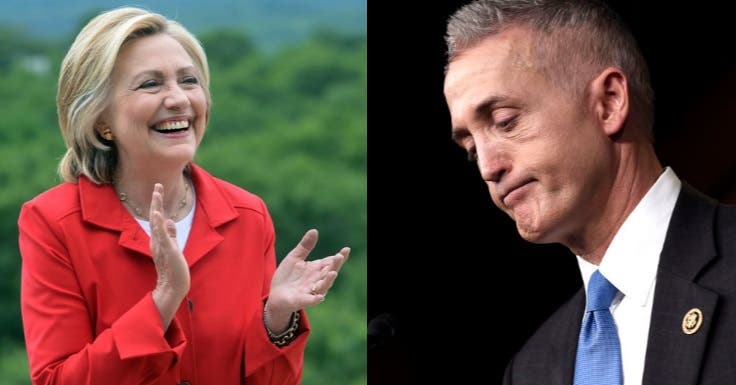 Fox News has thrown up the proverbial white flag and announced to the world the Republican-led Benghazi hearings have all been a hoax perpetrated on the American people in hopes of scoring cheap political points against Democratic presidential nominee Hillary Clinton.

While live on the air Fox Host Shepard Smith shocked the world when he said:

The House committee investigating the deadly terror attack in Benghazi today released its report. After a two-year $7 million investigation, the eighth investigation to date, the authors of the report make no new accusations and provide no new evidence of wrongdoing against the former Secretary of State Hillary Clinton.

It would appear the latest, and hopefully last, attempt by Republican conspiracy theorists has fallen flat. Fox News is the official propaganda arm of the Republican party, and they’re now finally admitting the jig is up. There has been more wasted taxpayer dollars on another fruitless and toothless report which delivered no new information and was conducted for purely partisan reasons during the presidential race.

It is likely Fox News made this announcement because their brand loyalty amongst Republicans has been plummeting. According to “BrandIndex” which surveys 2.5 million people, and breaks their answers down based on partisan lines, has watched Fox News fall from being the 10th best-perceived brand by Republicans in 2014 all the way down to 50th in 2016.

Over 100,000 documents have been reviewed and entered into the official Congressional record, and no wrongdoing was found. Hundreds of witnesses were interviewed and not a single one of them was able to offer an ounce of damaging testimony against Hillary Clinton. Millions of dollars have been spent that could have gone to a cause which actually required funding.

Even the acting Secretary of Defense at the time, Republican Bob Gates, who served under both President George W. Bush and President Barack Obama, said the critics of the response to the Benghazi attacks have a cartoonish view of the military’s deployment capabilities:

It’s sort of a cartoonish impression of military capabilities and military forces. The one thing that our forces are noted for is planning and preparation before we send people in harm’s way, and there just wasn’t time to do that.

Fox News also gave the nod because they are implying they are ready to concede the election to Hillary Clinton, in seeing that Republican presidential nominee Donald Trump’s chances of winning the election have sunk to a nearly 0% chance.

The assault on the American embassy in Benghazi was a tragedy for all Americans. Four Americans lost their lives on that fateful day, September 11, 2012. Two CIA operatives, Glen Doherty and Tyrone Woods, Information Office Sean Smith, and American Ambassador to Libya Chris Stevens. No amount of finger pointing will bring those brave individuals back to life. However, if one were looking to assess blame they might look to the Republican committee which cut the funding to security for embassies. Republican Congressman Jason Chaffetz was asked less than a month after the attacks on Oct. 10 2012, “Is it true that you voted to cut the funding for embassy security?” Cheffetz replied, “Absolutely! Look, we have to make priorities in this country.” He continued, “When you’re in tough economic times, you have to make difficult choices how to prioritize this.”

Will the Republican party spend millions of dollars investigating themselves for their own actual, provable, fault in the death of American patriots? Absolutely not.

Watch the comments from Chaffetz below: