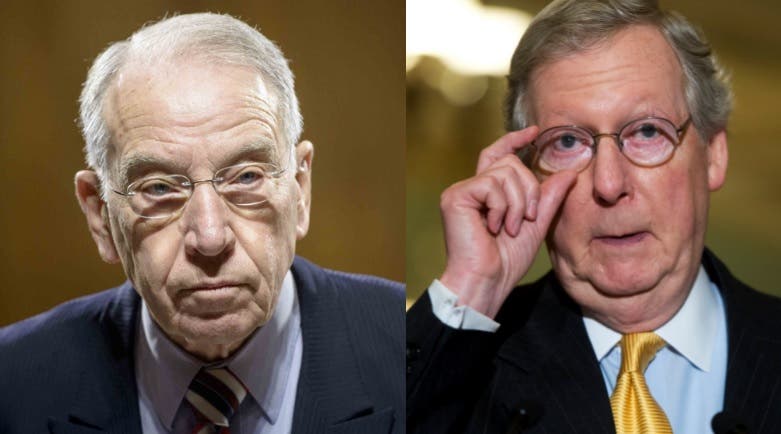 Bachmann Told Obama She’ll “Pray For Him.” His Response Is Hilarious

Republicans have forced the United States Supreme Court to work short-handed for most of 2016, and now the Iowa Senator in charge of the Judicial Committee just said that hearings would not be worthwhile in evaluating President Obama’s nominee Merrick Garland, to fill the court’s current vacancy. It has left the Supreme Court deadlocked on many 4-4 decisions, since they lack the deciding vote of a ninth member. Republican Senator Chuck Grassley (R-IA) had the nerve to blame the Senate’s inaction and their dereliction of their Constitutional duty on the cost of holding hearings.

Speaking to the Des Moines Review‘s editorial board, Grassley said:

“Sure, sure. Umm, I suppose, the tradition is – and I’m not sure I would follow this tradition because I know who I have on my staff, I know how deep you have to go into going through a person’s record, in order to hold a hearing that’s worthwhile. And so you appropriate – you get special, not appropriations – you get ‘special’ from the rules committee; additional money to hire additional legal people. My staff tells me that’s about a half a million to $750,000 to hire people to maybe work for three or four months to do it.

And so when 52 senators say they aren’t going to take it up, should I spend that money and have a hearing?”

President Obama’s final appointee Merrick Garland is considered a centrist pick, not very liberal and more conservative on issues of criminal justice than most of his party would prefer. But due to Republican obstruction, Scalia’s death has left the longest vacancy on the high court since the late 1960s, and the waiting period for Garland’s nomination is now the longest in American history.

If you combine Sen. Grassley’s logic, with what Arizona Sen. John McCain’s threats to block all of Hillary Clinton’s nominations to the Supreme Court – if elected – then it really seems obvious why she and President Obama have made a major pivot to help down-ballot candidates this week. The White House press secretary responded thusly:

Congressional Republicans never spare any expense when it comes to, say, investigating Benghazi, but they now claim to be pinching pennies by denying one of the most important constitutionally mandated officers – a judge no less – his public hearing in front of the formerly “world’s greatest deliberative body.”

Considering their recent admission that they may intend to permanently filibuster the Supreme Court if given 51 seats in the Senate during this year’s election, President Obama start considering a legal maneuver to seize upon a Constitutional ambiguity like this one described by a member of non-partisan Common Cause to fill the court after the election is decided.

The Republicans are defending 24 incumbent seats this year, and if people want to have a functioning court system, the only choice will be Democrats.