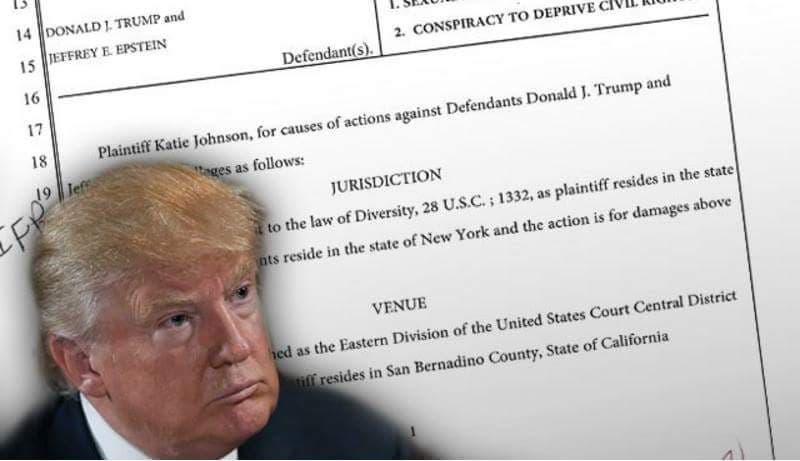 The documents pertaining to Republican presidential nominee Donald Trump’s upcoming trial where he is accused of raping a 13-year-old girl are shockingly savage. The testimony given against Trump is damning to the highest degree, sworn under oath, under penalty of going to prison if proved to be false.

Some of the documents in the case which contain the minutes of the testimony collected from the stenographer have been made available to the public, and they will horrify the sensibilities of any person with even a half-broken moral compass.

The plaintiff, Katie Johnson, and referred to in the official documents as “Jane Doe”, accused trump:

The imagery of a nude, seething, sweating Trump having his way with a defenseless teenager is enough to induce vomiting. Trump, allegedly, took a rope and tied the hands of a young girl, begging and pleading for him to stop and he did not listen. Her wrists sore and red from being burned by attempting to struggle free. That is the reality painted in the courtroom.

It seems, according to the documents, that there was an argument between Trump and his convicted pedophile buddy Mr. Epstein. Epstein was, it was said, murderously upset with Trump because the rape victim was a virgin and Epstein wanted to deflower her. When he learned of what Trump did, Epstein took out his anger on the victim:

The entire account has been corroborated with a witness who is known in the documents as “Tiffany Doe” who claims she was present for the assault:

It was at these series of parties that I personally witnessed the Plaintiff being forced to perform various sexual acts with Donald J. Trump and Mr. Epstein. Both Mr. Trump and Mr. Epstein were advised that she was 13 years old. I personally witnessed four sexual encounters that the Plaintiff was forced to have with Mr. Trump during this period, including the fourth of these encounters, where Mr. Trump forcibly raped her despite her please to stop.

When asked how “Tiffany Doe” knew “Jane Doe” she further elaborated that she used to work for Epstein as a recruiter of young women to attend his sex parties. Epstein is a convicted pedophile billionaire, and surely someone was working for him to lure teens for him to use and abuse. “Tiffany Doe” elaborated:

I persuaded the plaintiff to attend a series of parties of Mr. Epstein that took place during the summer of 1994. I told her that, if she would join me at the parties, she would be introduced to people who could get her into the modeling profession and she would be paid for attending.

Trump’s campaign has done everything they can to suppress this information from coming to public light. The day draws near when Trump will be forced to answer the allegations in a courtroom. Judge Ronnie Abrams decreed the evidence before her was worth moving the case forward, and the first part of the legal proceedings will begin on December 16th. That day cannot come soon enough.

Read the full document below: