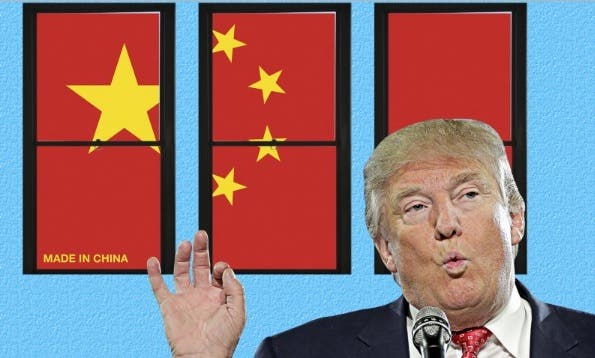 Republican nominee Donald Trump’s rapidly sinking campaign has found itself embroiled in yet another scandal as a shocking new report indicates that Trump Super PACs sought to funnel $2 million in funds from Chinese donors in exchange for “influence” in a possible Trump administration.

Undercover reporters posing as mysterious Chinese donors approached both the Trump and Clinton organizations after reports of individuals hiding foreign donations began to circulate, in an effort to see who would take the bait. The Clinton campaign refused to respond to their inquiries, but unsurprisingly, the perpetually duplicitous Trump campaign fell for it hook, line and sinker.

The Telegraph, a United Kingdom-based publication, reveals that Eric Beach, co-chairman of the pro-Trump Great America PAC (closely connected to Trump surrogate Rudy Giuliani and son Eric Trump), was open to the idea of selling influence for cash. and happily detailed how one could use tax-exempt 501(c)(4) “social welfare” organizations, which aren’t required to disclose donors, to accept the money and then pass it on to other political-action committees, concealing the money’s origins.

The undercover reporter was then contacted by Jesse Benton, a senior member of the Great America PAC, who detailed how they could launder the money through his private organization before it was then “passed on to two C4s before being donated by them to the PAC, or simply used to fund projects the PAC had already planned.”

Mr Benton’s proposal was for the Chinese client to pay his $2 million, via the reporters’ Singapore-based communications consultancy, to Mr Benton’s own public affairs firm, Titan Strategies LLC, in order to mask the fact that the money was coming from abroad.

At the meeting more than a week later, he explained how he would direct the funds evenly to two 501(c)(4)s which could donate the money to the Great America PAC in their name, or spend it on activities the PAC would otherwise have funded.  One of the organisations was Vision for America, which is run by Mr Beach.

Mr Benton said: “I don’t know if you ever hear journalists wring their hands about ‘dark money’ in politics  – they’re talking about 501(c)(4)s.”

Benton promised that the donor’s support would be “whispered into Mr Trump’s ear” and boasted of his expertise in helping American donors conceal their monetary gifts, which are clearly being accepted and distributed as bribes.

Benton was convicted in May 2016 of conspiracy and election finance fraud over a scandal involving the purchase of the endorsement of an Iowa state senator and sentenced to two years’ probation, six months of house arrest, community service and a $10,000 fine. He was abruptly fired by the Great America PAC but continues to work for them in a “voluntary capacity,” which includes making the arrangement to funnel millions of Chinese funds into Trump’s campaign as recently as two weeks ago. It just goes to show what kind of men the Trump campaign has operating behind the scenes – professional schemers who have spent their entire careers exploiting our campaign finance system to the detriment of our democracy.

It just goes to show that the old adage “accuse others of what you are guilty of” is the modus operandi of the Donald Trump campaign, which has been wrongfully accusing Democratic nominee Hillary Clinton of accepting “pay for play” donations through the Clinton Foundation, but just got caught literally selling influence to the Chinese in exchange for campaign dollars.

The exchange between pro-Trump supporters and who they thought was a mysterious Chinese donors illustrates perfectly the level of corruption the runs through every level of the Trump campaign. The Trump campaign’s willingness to sell influence to Chinese donors – who are Trump’s stump speech whipping-boys – is astoundingly hypocritical and is borderline treasonous.

The staggering revelations must send a warning to the entire US political machine, showing just how easy it is for foreign nationals to illegally pump money into our elections. Our next President must put an end to the disaster that was Citizens United and get the corrupting influence of dark money out of our elections.

Colin Taylor
Opinion columnist and former editor-in-chief of Occupy Democrats. He graduated from Bennington College with a Bachelor's degree in history and political science. He now focuses on advancing the cause of social justice and equality in America.
Latest Posts
Tags
China style Trump