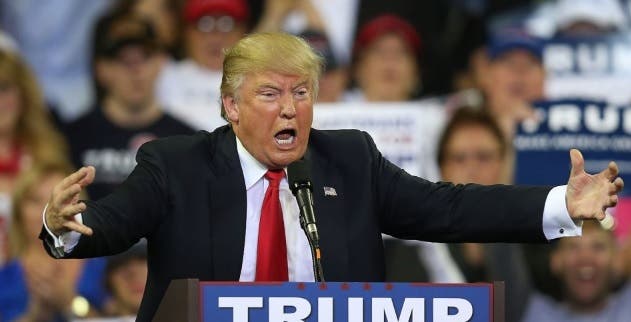 The Democratic National Committee just hauled Donald Trump and the Republican National Committee into a federal court demanding that they cease the program of minority voter intimidation that Trump has inspiring his supporters to carry out. The DNC’s lawyers asked a New Jersey federal judge to hold the Republican Party in contempt for violating a 35-year old consent decree to enforce the Voting Rights Act, and to issue an injunction to enforce the terms of the agreement, which will force Republicans to cease their efforts to suppress votes in minority communities during this year’s general election. The DNC lawyers cited Donald Trump’s frequent statements to supporters, as well as one of vice presidential nominee Mike Pence’s speeches where he admitted that the RNC was directly coordinating “ballot integrity” initiatives, which are explicitly banned under the agreement.

Trump’s overt actions to call his supporters to watch polls in “certain areas” are a classic attempt to concoct an illegal “ballot security program,” which is why we exclusively predicted this lawsuit could happen three weeks ago. Last week, Senator Elizabeth Warren (D-MA) weighed in with an op-ed published in the Washington Post urging the party to take action. This week, the Democratic Coalition Against Trump also took it upon themselves to lodge a new FBI complaint, over Trump’s voter suppression campaign which violates the same Voting Rights Act provisions covered by this recent DNC action which could land Republicans involved in the illegal campaigning – like Roger Stone – in criminal court. However, the Democratic Party’s action is based on a legal decision, so it’s going to be expedited in court, and is likely to yield a rapid order from the federal judge against the Republican party and Trump.

Here’s a summary of what the DNC’s lawyers filed in federal court today: (see below for complete document)

Defendant Republican National Committee (“RNC”) has violated the Final Consent Decree… by supporting and enabling the efforts of the Republican candidate for President, Donald J. Trump, as well as his campaign and advisors, to intimidate and discourage minority voters from voting in the 2016 Presidential Election. Trump has falsely and repeatedly told his supporters that the November 8 election will be “rigged” based upon fabricated claims of voter fraud in “certain areas” or “certain sections” of key states.

Unsurprisingly, those “certain areas” are exclusively communities in which large minority voting populations reside. Notwithstanding that no evidence of such fraud actually exists, Trump has encouraged his supporters to do whatever it takes to stop it—“You’ve got to get everybody to go out and watch . . . and when [I] say ‘watch,’ you know what I’m talking about, right?”—and has been actively organizing “election observers” to monitor polling stations in “certain areas.” Trump has even encouraged his “watchers” to act like vigilante law enforcement officers.

Although certain RNC officials have attempted to distance themselves from some of the Trump campaign’s more recent statements, there is now ample evidence that Trump has enjoyed the direct and tacit support of the RNC in its “ballot security” endeavors, including the RNC’s collaboration on efforts to prevent this supposed “rigging” and “voter fraud.”

In a rally in Denver, Colorado, on August 3, 2016, Trump’s vice presidential running mate, Indiana Governor Mike Pence, admitted that the RNC was directly coordinating with the Trump campaign on “ballot integrity” initiatives, stating that “the Trump campaign and the Republican National Committee are working very very closely with state governments and secretaries of states all over the country to ensure ballot integrity.”

The RNC’s support of Trump’s efforts to recruit “watchers” who are intended to intimidate voters at their polling places violates this Court’s Consent Decree as modified in 2009, which explicitly forbid the RNC from engaging in so-called “ballot security” measures directly, indirectly, or through its agents or employees. The RNC’s conduct also violates the Consent Decree under well settled law prohibiting defendants from evading court orders by acting in concert with third parties.

Donald Trump’s master of dirty tricks, Roger Stone is specifically named in the complaint because is the very same political operative, whose minority voter intimidation tactics landed the Republican party in hot water for 35 years in the first place for rigging a close New Jersey gubernatorial election! (which was won by the GOP candidate)

Roger Stone, one of Trump’s top advisors, has amplified Trump’s message. Stone was a key advisor to the 1981 campaign of former New Jersey Governor Thomas Kean, in which a “ballot security” force wearing black armbands engaged in widespread voter intimidation in Newark, Camden, Paterson and other minority neighborhoods in the State, leading to this very action and the Consent Decree that Stone is helping to violate today.

Stone is currently running a website called “StopTheSteal.org” that is actively signing up Trump supporters to “volunteer” to fight “voter fraud.” #StopTheSteal is a popular hashtag among Trump supporters on Twitter, and Stone’s group maintains an active Facebook presence. On October 23, 2016, Stone sent out a (now deleted) message via his Twitter feed deliberately designed to mislead Democratic voters by representing—using Secretary Hillary Clinton’s likeness and logo—that supporters can “VOTE the NEW way on Tues. Nov 8th” by texting “HILLARY to 8888,” after which voters would apparently “receive official confirmation.

Even worse, Roger Stone is trying to hide his voter suppression plan behind the facade of exit polling. DNC lawyers slammed the lunatic Republican political operative for his deception, and the court could order him to jail for contempt of court for his behavior.

Stone is also using social media to promote the common plan that Trump supporters—and particularly those who have agreed to engage in vigilante “ballot security” efforts—wear red shirts on Election Day. Further Stone is actively recruiting Trump supporters for “exit polling,” specifically targeting nine Democratic-leaning cities with large minority populations. This “exit polling” serves no legitimate purpose: Stone does not run a polling operation. Rather, the plain purpose of this plan is to intimidate minority voters.

If Donald Trump does not cease his open calls for voter intimidation, the DNC’s legal action could land him in contempt of court – and facing a jail term.

The RNC is working in active concert with Trump, the Trump campaign, and [Roger] Stone to intimidate and harass minority voters in violation of this Court’s Consent Decree. The Court should use its inherent contempt powers to remedy those violations, and enforce future compliance with the Consent Decree, with sanctions.

Republicans have spent a massive amount of time and money litigating to escape this Consent Decree just seven years ago, and obtained a new concession to limit it’s term from infinite – which they agreed to in the 1980s – down to an eight year term which would’ve expired next December. Now that the DNC has taken Trump and the Republican Party back to court, it’s very likely that the terms of the decree will be extended for another eight years through 2025, which will take it through the next two Presidential election cycles.

Donald Trump has wasted the entire last month complaining about a “rigged election” and encouraging vigilante poll watchers to visit minority neighborhoods. Now, a federal judge will have to step in to keep his campaign from breaking election laws across the country, and the Republican party will pay the price for his ignorance of election law for years to come.

“The notion of widespread voter fraud in modern American politics is itself a fraud,” said the DNC, “Every attempt to verify the presence of voter fraud has proven fruitless.”