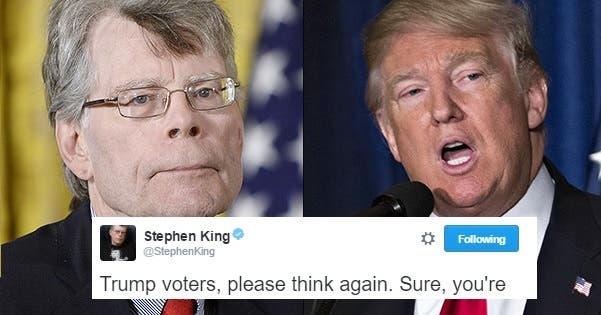 REVEALED: Hillary Wants Joe Biden To Be Her Secretary Of State

World famous author Stephen King has a message for the supporters of Donald Trump – a reasonable one that will be immediately ignored, but one that should be heard nonetheless.

Trump voters, please think again. Sure, you’re mad. I get that. But you don’t burn down the house because you don’t like the decor.

Trump voters are lashing out after being used and abused by a Republican legislature that has disrespected them and their woes for eight years, funneling the money of the working class up to the richest Americans and passing no meaningful legislation. They have every right to be mad – but voting for Donald Trump is not the answer. Trump’s “plans” for our nation will wreck the economy, undo all the progress of the Obama Recovery, and further divide our country along ethnic and racial lines.

But it seems like most Trump voters don’t want answers – they just want to be mad.