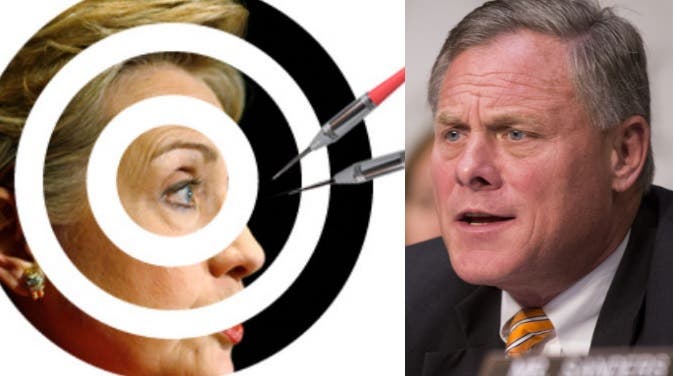 Burr is the Republican Chairman of the Senate Intelligence Committee, a high title which seems inappropriate for a man of such small mind as to muse of the death of an American presidential candidate in a public place during a general election. CNN reports that:

The North Carolina Republican, locked in a tight race for reelection [against Democrat Deborah Ross], quipped that as he walked into a gun shop “nothing made me feel better” than seeing a magazine about rifles “with a picture of Hillary Clinton on the front of it.” Sen. Richard Burr privately mused over the weekend that gun owners may want to put a “bullseye” on Hillary Clinton, according to audio obtained by CNN.

“I was a little bit shocked at that — it didn’t have a bullseye on it,” he said Saturday to GOP volunteers, prompting laughter from the crowd in Mooresville, North Carolina. “But on the bottom right (of the magazine), it had everybody for federal office in this particular state that they should vote for. So let me assure you, there’s an army of support out there right now for our candidates.”

The comments resemble similar ones made by Donald Trump in August when the GOP nominee said “Second Amendment people” could take matters into their own hands if Clinton became president.

Senator Burr also mentioned how proud he was to have crippled the effectiveness of the Supreme Court by delaying President Obama’s appointment of Merrick Garland which itself has set a record for longest time after such an appointment without a hearing.

In the same talk, Burr bragged that he’d support keeping the court in a state of permanent dysfunction by refusing any of Democratic nominee Hillary Clinton’s judicial appointments, including to the Supreme Court.

It’s fast becoming apparent that Republicans merely used that piece of double-talk as the start of an existential attack on American-style democracy, which requires a reasonable opposition to cooperate and compromise in decisions for a functioning government for the betterment of the people.

Double talk from Republican Congressmen of this type has become all too commonplace, but with Senator Burr’s lies to North Carolina voters, it’s so bold that he even gave opposite quotations to local reporters versus those inside the beltway and thought he could get away with it.

Burr both publicly distanced himself from Trump and at the very same time doubled down on supporting Trump after his tapes emerged revealing the Republican nominee’s serial predilection for sex assault.

Now that Richard Burr’s deplorable tape has emerged, the Republican Senator is facing calls to resign his position in the Senate altogether.

Unlike Trump, the North Carolina Republican has already issued an apology, but it remains to be seen whether that will have any saving grace for the vulnerable Republican, who is locked in a dead heat with Democrat challenger Deborah Ross.

Listen to the entire recording here.