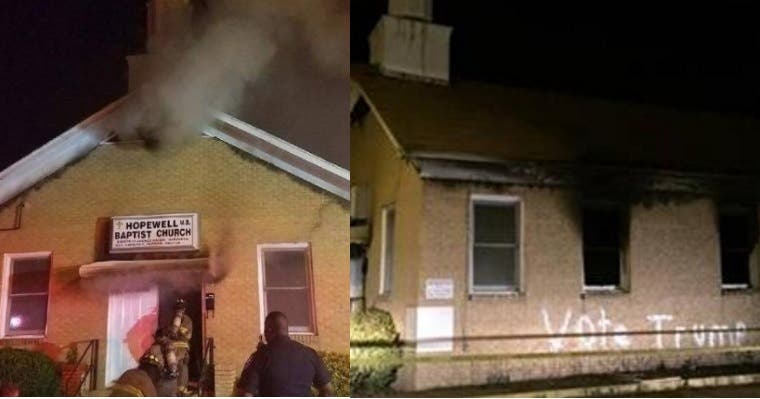 Tensions are mounting as the most viciously divisive election in our nation’s history draws closer, and it is truly bringing out the worst in the American people. An African-American church in Mississippi, the Hopewell M.B. Church in Greeneville, has been set ablaze, causing heavy damage to the building – and in case there was any mystery as to who was responsible, “VOTE TRUMP” was spray-painted on the side.

For all their talk about “religious freedom,” conservative Trump fans sure does have a fondness for attacking religious institutions. Mosques have been torched around the country in response to terrorist attacks, collectively punishing members of an entire religion for crimes committed by mentally disturbed individuals.

Black churches have also been torched throughout the South as white supremacists and neo-Nazis come out of the wood-work, emboldened by Trump’s racial dogwhistles and ethno-nationalist rabble-rousing. The worst of these targeted attacks came last summer when a white supremacist walked into the Emanuel AME Church in Charleston, S.C, and murdered nine peaceful worshippers.

This is the second act of domestic terrorism committed in the United States today, coming just hours before a white man murdered two police officers in Iowa, and as Trump continues to rile up his base and perpetuate the delusions of a conspiracy against him, it’s not likely to be the last.