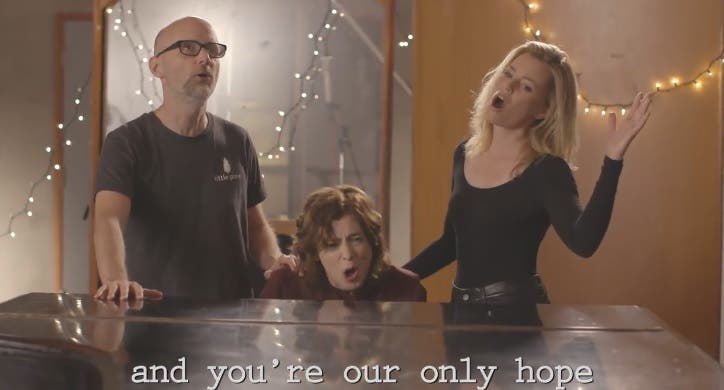 In this amusing but alarming musical number, famed songstress Rachel Bloom joins a star-studded crew to pen a parody of “We Are The World” as a last-ditch attempt to remind American voters of just what exactly is at stake in this election, pleading with the American people to please, please not vote for Donald Trump.

“I can’t believe I’ve had to stoop so low. But an orange talking STD has driven me to this recording studio! And now Moby is on the drums while Elizabeth Banks plays bass. So we can try to convince the USA not to shoot itself in the face.”

At this point in the game, if you haven’t accepted that Donald Trump is a serial sexual predator who has made his entire business career off the backs of others and his entire political career off of appalling and un-American ethnonationalism who would destroy our economy and leave the world at the mercy of the predatory ambitions of dictators like Vladimir Putin, this song isn’t going to convince you. But it’s a fun little diversion that still hits home just how critical the result of this election is going to be.

HOLY SH*T (You've Got To Vote) from Funny Or Die