Liberal champion Sen. Elizabeth Warren (D-MASS) took to Facebook today to issue a stark warning to Democrats, Republicans, liberals, progressives, conservatives, and reasonable Americans of all walks of life, forewarning us against “staying quiet” for too long as Donald Trump descends even deeper into the dark wormhole of racial hatred and fascist fury. 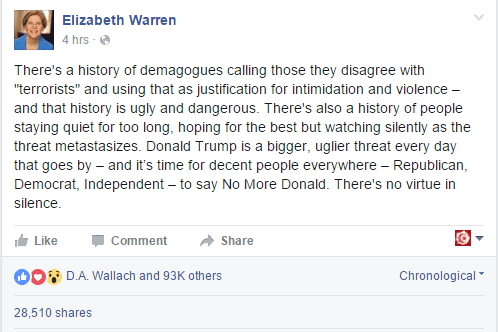 Indeed, there is no virtue in silence. As xenophobic attacks against non-white Americans increase in frequency, open racism and violence at Trump rallies is spiking as white supremacists and bigots come out of the woodwork to assert their presence with misguided emotion and shows of strength, rational and reasonable Americans who believe in the values of tolerance and diversity that made our country great must stand up to defend all of our citizens against the threat posed by Trump and his rabid followers. Liberals must mobilize a counter-movement to show that we will not allow ignorant bigots and narcissistic buffoons to bully us into silence.