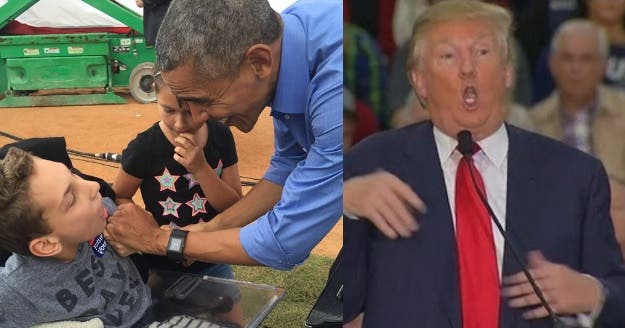 On Tuesday, our nation is going to the polls to make a very important choice. We will not just choose who will lead our nation for the next four years; we will make a statement about what kind of nation we are and decide what kind of nation we want to be in the future. And with that in mind, let us present with the story of “JJ,” a young boy with cerebral palsy, as recounted by the Florida Press Secretary of Hillary For America, Valentina Pereda.

Today was hands down the best day of my time in the campaign. No words can even explain… but I will try.

Yesterday, a reporter called me in tears after witnessing a 12-year old suffering from extreme cerebral palsy get kicked out of a Donald Trump rally.

He had told his mother that he wanted to stand up for the disability community, so he asked to be taken to a Trump rally. JJ was terrified about what Trump’s America would mean for people like him, so he – unable to vote but possessing the bravery to still make his voice heard – was determined to go and protest. Once there, JJ did a simple, quiet, but defiant act: he held up a Hillary Clinton placard.

Immediately, the crowd started chanting “USA, USA, USA” (as if this had anything to do with it… or perhaps he was unAmerican for being disabled?), and Trump pointed to security and ordered them to “get them out!”.

As Secret Service escorted JJ, his mother and two sisters, Trump supporters shouted obscenities and even kicked his wheelchair.

What kind of nation do we live in?

While I’m listening to this story, I freeze: first in disbelief and, next, feeling utterly helpless. What the hell could I do to make this child even slightly forget that experience? I’m a nobody!

I tell the reporter to share my number with JJ’s mother and that the only thing I can do is escort them into President Obama’s rally the following day. No chance for VIP treatment and much less to meet the President.

This morning, JJ’s mother calls me and asks if my promise of getting them into the event is realistic. She wanted to be extra cautious before sharing the news with JJ. I said yes, I can get them in, but that’s it.

As I arrive at the venue hours before the start of the show, I pace around the stadium examining routes to wheel JJ into the VIP area. The ADA zone was too far from the stage, and I wanted JJ to be as close as possible. I conspire with my colleague Angela Johnson and we start devising a plan.

JJ’s mother calls me to tell me they’ve arrived. Once I greet her, I huddle the family to go over the course of action. We needed to swim through a sea full of people, cross muddy turf and then break through another wall of people to finally settle in the VIP area. Then, it was mission on.

All political staffer knows the attitude one needs to put on to escort a “principal”…. so I turned my mode on. I walked in front of the wheel chair and began asking folks to please break away. Overly assertive and resolute to get JJ to his spot, we were able to hike across the field and settle into the target zone.

Until, of course, my mind begins to race again. I pace back and forth as I swift through mundane work emails… right then and there, I decide to “go rouge”. (gasp!!!)

Immediately, I messaged a friend that I knew could help and told him the story. He asked if someone had reported on it (again, one first listens with disbelief) and I forward him a blog. Not much pick up from the press.

I point to him where in the VIP area JJ is sitting with the hope that when POTUS would work the ropeline, he’d somehow remember JJ’s story and spend two extra seconds with him.

And with that, I was satisfied with was to be accomplished. A handshake.

So I sneak out of the stadium mid-POTUS speech in order to avoid the traffic. Shortly after, colleagues begin to frantically text and call me to tell me my friend from the WH was looking for me.

I sprint about half a mile back into the stadium and push my way through angry Secret Service agents and thick crowds. I finally spot my friend who, once again, asks me to point out where the boy is sitting, which I do. Then – out of the blue – I tell him, “well, how about I wheel him out of the VIP area and bring him around?”

My friend thinks about it for a second, looks around for other accomplices, and nods his head with approval. I run back into the crowd and to the VIP section. Once again, I enlist Angela and together we swim into a sea of people to wheel JJ out, through the turf, and finally reach my friend who escorts us to the other side of the barricades.

Wow, this is really happening.

At that moment, JJ’s mom tells him he’s going to meet the President. The rest is indescribable…. JJ jumps out of his seat and erupts into cheer… his smile almost bursting out of his face. His body overcome by light, when just the day before it almost succumbed to hate.

The rest of the story is explained by the pictures below. My lesson: Always have the courage to do what feels right. The universe will always conspire.

We’ve all seen, over and over again, the footage of Donald Trump mocking a disabled reporter. It’s become one of the defining images of this campaign – a cartoonish buffoon so crude and he would openly mock the man for daring to speak out against him like a child on the playground.

That is what Donald Trump represents. Hatred, bullying, intolerance. Hillary Clinton and the Democrats represent a vision of a different America – an America which embraces all of its children, no matter their ability, race, sexuality, gender, or other social constructs that we use to define ourselves.