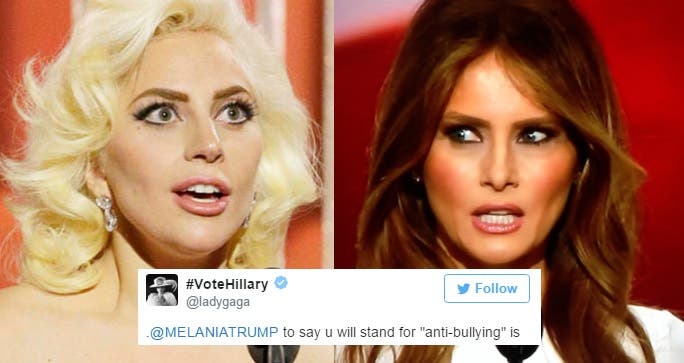 World-famous pop star Stefani Joanne Angelina Germanotta, better known as Lady Gaga, called out Melania Trump on Twitter today for Friday’s pandering speech, in which the former model railed against a social media culture that was “too mean and too tough.”

“It is never OK when a 12-year-old girl or boy is mocked, bullied or attacked. It is terrible when it happens on the playground, and it is absolutely unacceptable when it is done by someone with no name hiding on the internet. We have to find a better way to talk to each other” said Melania, somehow with a straight face.

The media and the nation at large immediately seized on the incredible hypocrisy of the statement, considering that her husband, Republican nominee Donald Trump, has made bullying a central tenet of his appalling campaign of bigotry. From insulting his sexual assault accusers for being “not pretty enough” for him to molest to calling former Miss Universe winner Alicia Machado a “disgusting con” and telling his supporters to “check out her sex tape” (which does not exist, for the record), Trump has bullied everyone and everything that has stood against him. The New York Times even has a list of 282 people, places, and things that Trump has insulted on Twitter – and that’s from January.

So it is extremely appropriate for Lady Gaga to call her out on Trump’s preferred insulting platform of choice.

.@MELANIATRUMP to say u will stand for “anti-bullying” is hypocrisy. Your husband is 1 of the most notorious bullies we have ever witnessed.