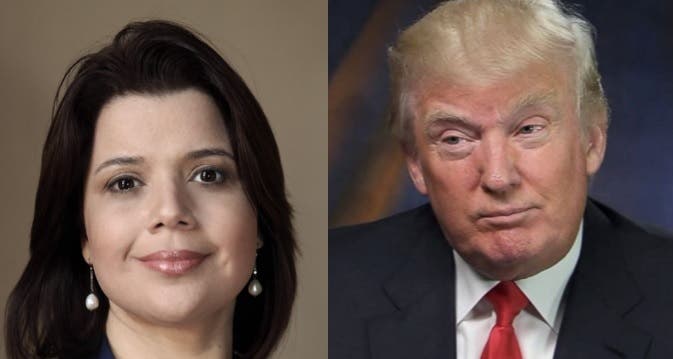 Republican Ana Navarro is one of her party’s most outspoken national commentators, doing battle against the Trump movement nightly on CNN, but not comfortable voting for Hillary Clinton either – until now.

In this moving editorial, she just revealed that the contents of her ballot included a vote for the Democratic nominee, and sixteen reasons why she had to cast her vote against the Republican party’s nominee Donald Trump.

I voted against Donald Trump because I am a Republican. I accept that Trump duly won the Republican nomination. But I do not accept that he represents Republican values — not the ones I grew-up respecting.

I had hoped that a week before the election, Trump would be losing Florida by a large enough margin that my vote wouldn’t matter. But darn it, my home state is too close to call. Florida could be the decisive state (again) as to who ultimately becomes the next president of the United States. I thought back to the 2000 election, which was decided by 537 votes in Florida. I thought about how I would feel if the same thing happened in 2016. I thought and I thought and I thought….

Then I cast my vote for Hillary Clinton.

Ana Navarro was the national Hispanic campaign chairwoman for Republican presidential nominee John McCain in 2008.Her impassioned reasons for voting for Hillary Clinton over Donald Trump were numerous in the 2200 word column she filed today, but the most important reasons she noted is the Republican nominee’s utter lack of moral character and disgusting personal behavior.

Navarro became a dyed-in-the-wool GOP partisan because of her unique upbringing as a Nicaraguan-American. Her father was a devout Republican and was involved with the vicious right-wing “contra” terrorist groups that tortured, raped, and murdered their way across the jungle in their efforts to fight the Communist Sandinista government in the 1980s.

President Ronald Reagan’s illegal support for the Contras, which culminated in one of the most appalling back door deals in our nation’s history, the Iran-Contra Affair, earned her father and thus young Navarro’s loyalty.

For those reasons, it had to be an excruciating choice for her to make, between supporting a party to which she has a visceral personal connection, or voting for the only qualified nominee because it is her duty to America to choose the best candidate.

I have been a Republican since before I could vote. My family fled communism. Ronald Reagan fought communism. That sealed the deal for me. I have been an active partisan my entire adult life. This is the first time I vote against the Republican nominee for President.

Our founding fathers set up a government of checks and balances. We can and have survived presidents with bad judgment. But I fear the effects on America of a president with bad character. Some tell me, in 2016 we should no longer expect the president of the United States to be a role model. I refuse to accept that.

The president of the United States has to lift us all in moments of national grief. The president of the United States has to hug the children and spouses of fallen soldiers. That person represents us all. That person is recognized as the face and the voice for America in front of the rest of the world, and more importantly, by our children. A person supported by the Klu Klux Klan and its former Grand Wizard David Duke can never represent me. He can never be a role model for me.

Ana Navarro’s contrarian voice about the Republican party’s lost direction has been a breath of fresh air on CNN throughout this year’s election, and her rational take on the destructive racist candidate that the Republican Party nominated has been real, accurate and true. Unfortunately, she’s a Latina, an immigrant and a woman, so her party isn’t interested in accurately true comments, nor is it interested in representing her either.

Hopefully, more Republicans take heed of her call to vote for America’s only qualified candidate for President – Democratic nominee Hillary Clinton, because it’s the only right decision for our country.