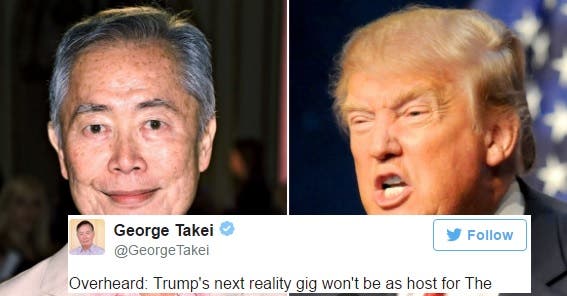 Giselle Just Revealed Neither She Nor Tom Brady Are Voting Trump

Overheard: Trump’s next reality gig won’t be as host for The Apprentice. Instead he’s on The Biggest Loser.

Personally, I’m pretty sure Trump’s next reality show gig will be on Lock Up after his racketeering case gets sent to federal court and Trump hopefully goes to prison for defrauding thousands of Americans out of their hard-earned money.

Takei also shared a more thoughtful take on the eve of the election on Facebook, and it’s definitely worth a read:

Many fans have written asking for some words of advice, solace, or perhaps even hope as we find ourselves here, the night before the election. Indulge a fellow of my more advanced years, and permit me to convey some perspective and to expand upon a theme I have spoken of before. From where I stand, progress may be painful, but in the end, the forces of reason, compassion, and equality always prevail. Yes, we will win.

When I was a boy of four, my family and I were interned for years inside barbed wire prison camps because we happened to look like the enemy who had bombed Pearl Harbor. Today, Japanese Americans are a proud part of our national heritage, and we were the first to stand with Muslim Americans after 9/11 to decry calls for racial and religious profiling. We came from a dark place, but we remember, and we carry a bright torch. Tolerance and acceptance will flourish in America. We will win.

When I was a young man, in many states I could not by law even marry a Caucasian because of strict anti-miscegenation laws. Today, after decades of struggle to gain recognition and equality, for both biracial and same sex couples, I am legally married to my gay, white, male spouse, Brad. What once was the love that dare not speak its name can now shout itself freely from the chapel. Love and understanding took root across the land, and young people today can be with whomever they were destined to love. We will win.

I marched with Dr. Martin Luther King, Jr. during an era where the most basic rights of association, voting and participation in civil society were denied in Jim Crow America. But Dr. King inspired and reminded America of its promise. And while we still have far, far to go, I am always amazed that I lived to see the election of our first African American president. The road to true equal rights and justice is not, and has never been, an easy one. But despite its many twists and turns, we will continue to march along it. We will win.

From Selma to Stonewall, Seneca Falls to Standing Rock, the history of America is often forged in a crucible of conflict and courage. Today, it is no different. We may face setback, or we may face triumph, but the direction will remain clear so long as our vision and our convictions do. You need only take measure of the passion of America’s youth–more cosmopolitan, more diverse, more rooted in science, more aware of their responsibilities as stewards of this Earth than any generation before them–to regain confidence in our national future. Look to them. We will win.

So tomorrow, as our nation at last finishes the most wrenching election in recent memory, I cast my own vote with both an eye to our past, where we have already overcome so much, and an eye to our future, where so much promise remains. We will vote, we will get through this. We will win.