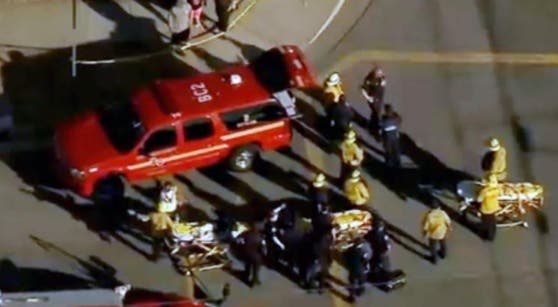 Gun violence has broken out at a Los Angeles area polling place, and four people have been shot; one has died from their injuries. It’s still an active shooter incident right now. ABC news reports that two polling places have been shut down:

The Los Angeles County Registrar alerted voters that polling places at Memorial Park and Dalton Elementary in Azusa were affected.

The Azusa Police Department responded to the shooting, which happened 30 minutes east of LA’s downtown areas, just after 2pm local time today, and police advised nearby residents to shelter in place just 35 minutes ago. The Los Angeles County Sheriff’s Department is also responding to the situation according to the LA Times.

The condition of the four people who have been shot, and the identity of the shooter have not been determined at this time. This is a breaking news situation, and will be updated as new information emerges.

#LASD Homicide handling the @AzusaPD shooting investigation. It does not appear to have any direct connection to the election/polling places pic.twitter.com/masM6337Sw

All officers initially pinned down by gunfire are accounted for, safe and rescued