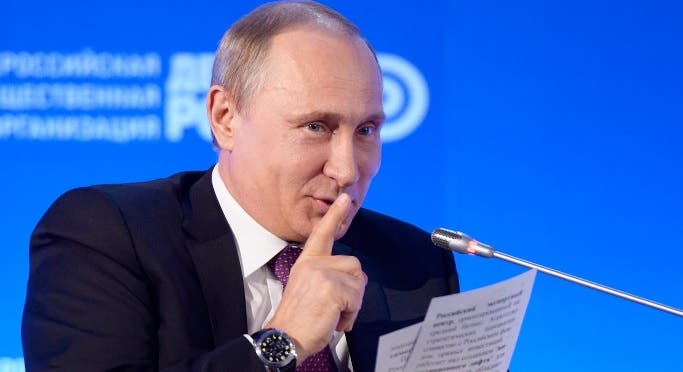 As the dust of the presidential election settled, the tyrants in Moscow were busy congratulating themselves on a job well done. For months the Kremlin has denied having meddled in the American election by hacking the email servers of the Democratic National Committee and the Clinton campaign, even as the evidence has mounted. With their man now headed for the White House, however, the Russians have finally owned up to their interference.

Sergei Markov, a pro-Kremlin political analyst with tight ties to Putin’s inner circle, gave a remarkably candid interview to The Guardian today in which he suggested that Russia was indeed behind the WikiLeaks hacks after all. While denying any direct Russian interference in the election, he said that “maybe we helped a bit with WikiLeaks.”

Markov also detailed precisely what Putin is looking to gain from a Trump presidency, saying that it would limit “American backing for the terroristic junta in Ukraine” and increase the chances of US-Russia cooperation in Syria. The “terroristic junta” of course refers to the democratic government in Kiev that has been resisting Russia’s increasingly expansionist tendencies in the region. And any negotiations with Russia in Syria would inevitably lead to the continuation of the near-genocidal rule of President Bashar al-Assad.

In the wake of Trump’s election Russian oligarchs were also jubilant that American sanctions, imposed on the country after its illegal annexation of Crimea in 2014, would soon be lifted. Indeed Trump’s shocking embrace of the brutal Russian dictatorship has been driven largely by his monetary ties to the cartel of oligarchs that essentially runs Moscow. Trump and his campaign are so thoroughly in bed with the Russian elite that the FBI is now investigating former campaign manager Paul Manafort’s ties to the oligarchs.

It is certainly a cruel irony that for all Trump’s militant chauvinism, he has so totally kowtowed to Russia and was helped into office by the Kremlin itself in an unprecedented stain on the independence of American democracy. Hopefully the federal investigation of Trump’s Russia ties will only widen as new information comes to light.