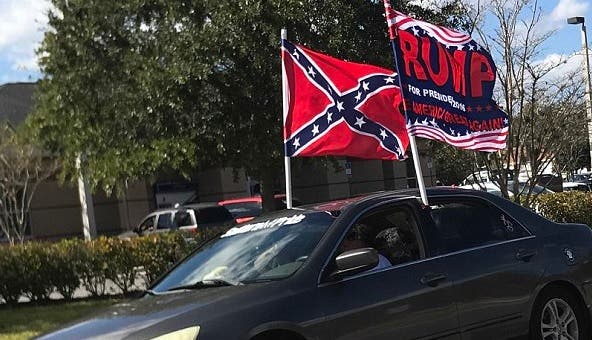 Hope Still Lives: Robert Reich Has An Inspiring Message For The American People

While Hillary Clinton is more than likely on her way to a resounding victory Tuesday night, it will not be for lack of Republicans’ trying to suppress minority turnout. On top of a massive and systematic campaign of voter suppression by Republican commissions throughout the country that one federal judge called “something out of 1901,” Democratic voters have been facing relentless intimidation from individual groups of Trump supporters.

The most recent example comes from Florida, where a parade of at least a dozen trucks outfitted with Confederate flags and Trump flags apparently drove around to various early polling locations on Monday to intimidate Clinton voters.

The incident was caught on camera by John Zaccaro Jr, a volunteer poll watcher, and went viral after his sister posted the incident on Facebook. In his videos the Trump parade can be seen honking and shouting at voters trying to enter the polls in what his sister described as “blatant voter intimidation and suppression efforts.”