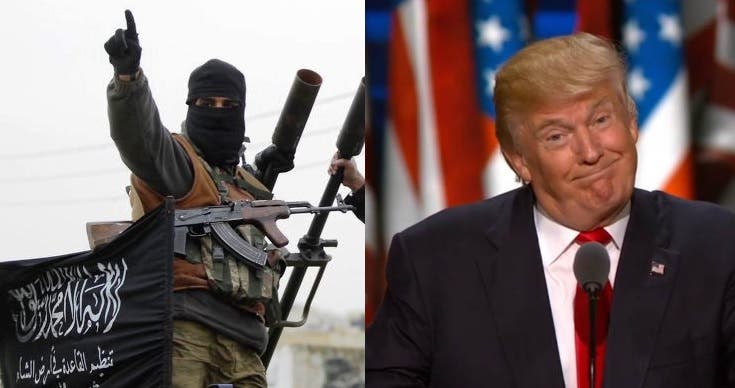 A prominent al-Qaeda-linked jihadist, Abdallah Muhammad bin-Sulayman al-Muhaysini, has declared that Donald Trump’s election is a huge victory for the terrorist group.

Muhaysini is a religious adviser and financial manager for Jabhat Fatah al-Sham (formerly Jabhat al-Nusra), al-Qaeda’s arm in Syria. He has been designated a terrorist by the US government.

He sent out a series of tweets celebrating the victory of Donald Trump as a huge win for jihadists. Muhaysini was ecstatic that a President Trump will “bomb the sh*t” of out the Middle East and escalate the anti-jihadi operation into a war against Islam. Theis proves to worried Muslims that terrorist propaganda is correct, that Western civilization hates Islam, and the two are inherently incompatible.

Trump constantly asks why President Obama refuses to say “radical Islamic terrorism” – this is why. Obama has fought hard to dictate the fight against individual groups of bad actors and not frame the conflict against a religion as a whole, as to not alienate millions of Muslims and perhaps make jihadi propaganda more attractive – a critically important nuance that Donald Trump will gleefully ignore in his rush to prove his “strength.”

Given the number of Islamophobic attacks that have taken place in the United States since Donald Trump was elected, it’s hard to argue with them. Donald Trump’s election has been a huge victory for jihadis and for crackpot dictators across the world, and we’ll be paying the price for it for years to come. Trump is a danger to our national security, and he’s proved it on day one.

Translated and reported by Rukmini Callimachi of The New York Times:

1. Today, a prominent al-Qaeda-linked jihadist issued a series of Tweets, calling @realDonaldTrump‘s electoral win a victory for their cause

2. The jihadist who issued the Tweets is named Abdallah al-Muhaysini & he was designated a terrorist by US today: https://t.co/atUwGoEFQx

6. Like ISIS, al-Qaeda has long argued that America’s incursions in the Middle East is not a war on terrorism, but rather a war on Islam

7. I hear this every time I talk to a member of AQ or ISIS & I don’t think they’re faking it. They *believe* US is trying to abolish Islam

13. In both the posts by ISIS supporters and now by an al-Qaeda leader, the message is clear: “Muslims are not safe in West; join us.”