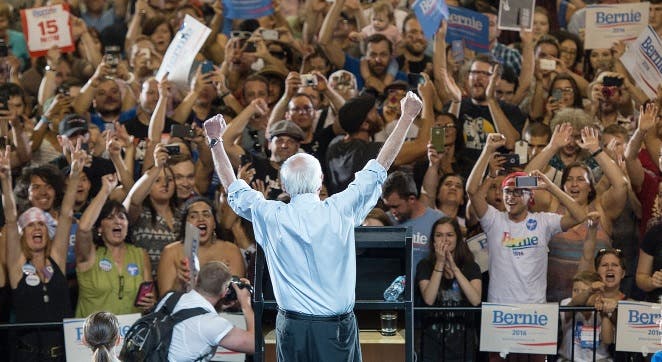 Populist champion Sen. Bernie Sanders (I-VT), the upstart democratic socialist who took the nation by storm during the primaries, is leaving open the possibility of another White House run in 2020, bringing hope to the thousands of disaffected Democratic voters who were turned off by Hillary Clinton’s center-right status quo approach.

“Four years is a long time from now. We’ll take one thing at a time, but I’m not ruling out anything” said Sanders. He also had a well-deserved rebuke for the Democratic Party.

“It is an embarrassment, I think, to the entire of Democratic Party that millions of white working-class people decided to vote for Mr. Trump, which suggests that the Democratic message of standing up for working people no longer holds much sway among workers in this country.

‘You cannot be a party which on one hand says we’re in favor of working people, we’re in favor of the needs of young people but we don’t quite have the courage to take on Wall Street and the billionaire class. People do not believe that. You’ve got to decide which side you’re on.”

Sanders’ primary campaign was derailed by the machinations of the Democratic National Committee, which had decided long ago that Clinton was their choice. The arrogance of the DNC and the disdain with which party elites treated Sanders supporters drove thousands away from the Democratic Party. Their subsequent refusal to acknowledge the strength of his economic message and their stubborn refusal to move away from neoliberal corporatism turned out to a critical error – and our whole nation will pay for it now.

It’s clear now that Bernie Sanders was the right candidate after all – and now we may have another chance to make things right.

Add your name to call on prosecutors to ARREST DONALD TRUMP for his crimes!Advertisements
Tags
bernie sanders style