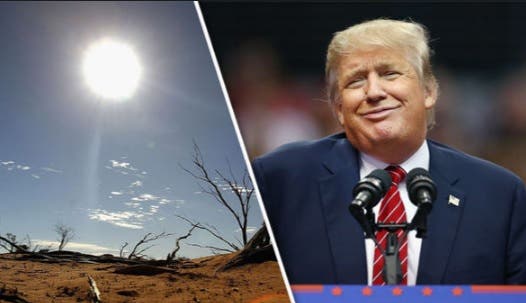 The Republican President-elect just named Myron Ebell to head the campaign’s Environmental Protection Agency transition team. Ebell is notable because he’s not just a climate denier, but a leader amongst the “head in the sand” crowd as the director of the Center for Energy and Environment at the conservative Competitive Enterprise Institute. It’s tough to brand climate scientists reporting about massive icebergs melting and breaking off of Antarctica as “alarmist,” but that’s precisely how the GOP’s point man to gut environmental regulations see it. Scientific American reports:

Myron Ebell is a well-known and polarizing figure in the energy and environment realm. His participation in the EPA transition signals that the Trump team is looking to drastically reshape the climate policies the agency has pursued under the Obama administration. Ebell’s role is likely to infuriate environmentalists and Democrats but buoy critics of Obama’s climate rules.

Ebell, who was dubbed an “elegant nerd” and a “policy wonk” by Vanity Fair, is known for his prolific writings that question what he calls climate change “alarmism.” He appears frequently in the media and before Congress. He’s also chairman of the Cooler Heads Coalition, a group of nonprofits that “question global warming alarmism and oppose energy-rationing policies.”

Even massive carbon energy companies, like Exxon Mobil, believe that climate change science is not only real, but represents the only real consensus about how and why man-made activities are impacting temperatures and precipitation levels around the globe. In addition, climate change is driving a rapid level of sea level rise that threatens low lying and coastal areas, and is causing more “hundred year” flooding events each year. A company whose main product is carbon has this to say about climate change, which only highlights the insane ideas pushed by Republican America’s President-elect:

We have the same concerns as people everywhere – and that is how to provide the world with the energy it needs while reducing greenhouse gas emissions. The risk of climate change is clear and the risk warrants action. Increasing carbon emissions in the atmosphere are having a warming effect. There is a broad scientific and policy consensus that action must be taken to further quantify and assess the risks.

ExxonMobil is taking action by reducing greenhouse gas emissions in its operations, helping consumers reduce their emissions, supporting research that leads to technology breakthroughs and participating in constructive dialogue on policy options. Addressing climate change, providing economic opportunity and lifting billions out of poverty are complex and interrelated issues requiring complex solutions. There is a consensus that comprehensive strategies are needed to respond to these risks.

Former New York Mayor Ed Koch famously said that, “the people have spoken, and now they shall be punished.”

Clearly, America’s voters have bought into the “chinese hoax” theory from our pussy-grabbing President-elect, who uses gobs ignorance and plenty of hairspray to explain why our planet is getting continuously warmer. A shiny tuft of blond hair and an endorsement from the KKK is all America’s top elected official-to-be needs to blissfully ignore the unambiguous evidence that climate change is man-made.

The people didn’t just select a serial sexual predator, they selected his entire team of radical lunatics who are ready to gut 70-80% of climate regulations.

Now our entire planet will be punished.