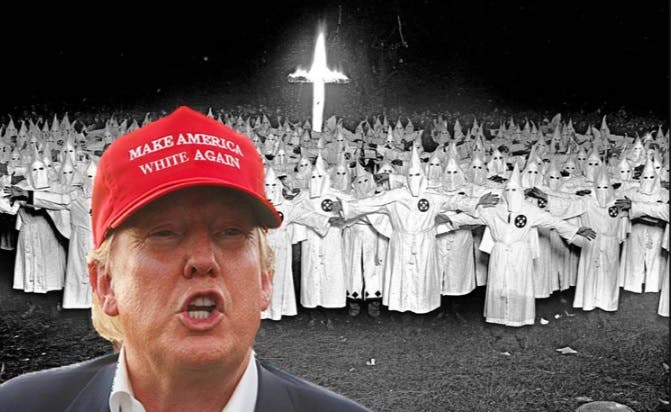 It’s clear that the outpouring of hatred and racism that the Donald J. Trump campaign unleashed was just the beginning. For the first time in decades, the Ku Klux Klan will be openly marching, proudly waving the flag of white supremacy in support of the man they endorsed, President-elect Donald J. Trump.

The Loyal White Knights of the Ku Klux Klan in Pelham, North Carolina, has announced they will be holding a “Victory Klavalkade Klan Parade” to be held on December 3rd. A location has not yet been decided, but the announcement crowed that “Trump’s race united my people.”

That announcement topped this declaration as to the group’s objectives.

Our goal is to help restore America to a White Christian nation, founded on God’s word. This does not mean that we want to see anything bad happen to the darker races … we simply want to live separate from them … As GOD intended. (Lev.20:24-25) It is a simple fact that whenever these races try to integrate themselves into White society, that society is damaged immensely … perhaps even destroyed altogether. Everything that we do as Klan members is in furtherance of our ultimate goal. We are not evil; hateful people as our enemies would have you believe. We are common white people from all walks of life who have recognized the problems that our race is facing. We have chose to stand and fight for those things that we hold dear to our people. Won’t you stand with us, while there is still time! It is the duty of all white Christian men and women to fight against the Communist who have stolen our Nation…

Most of our youth are on DRUGS or pregnant with a mongrel child. If our forefathers could see America today they would have our Government Leaders put to DEATH. For Treason against the American people. They are rolling in their graves as you read this now. We as a people can change this course in which America has taken. We need to come together as WHITE CHRISTIAN AMERICANS and spread the word to others. Grab the blind Liberals by their heads and shake them until they wake up. From their JEW TUBE naps and tell them to look around because the ship is sinking. And through the Ku Klux Klan we will wake America up to the evils which are in our Government. We will unite proud white Americans to our cause because we have the LORD on our side. And with CHRIST we can’t lose.

Our country just made a monumental mistake that cannot be undone, and we will live with the consequences for years. Hate groups like the Ku Klux Klan have been emboldened like never before and eager to take their place in the public eye once more. The lynching hoods will be donned and Confederate flags will wave once again.