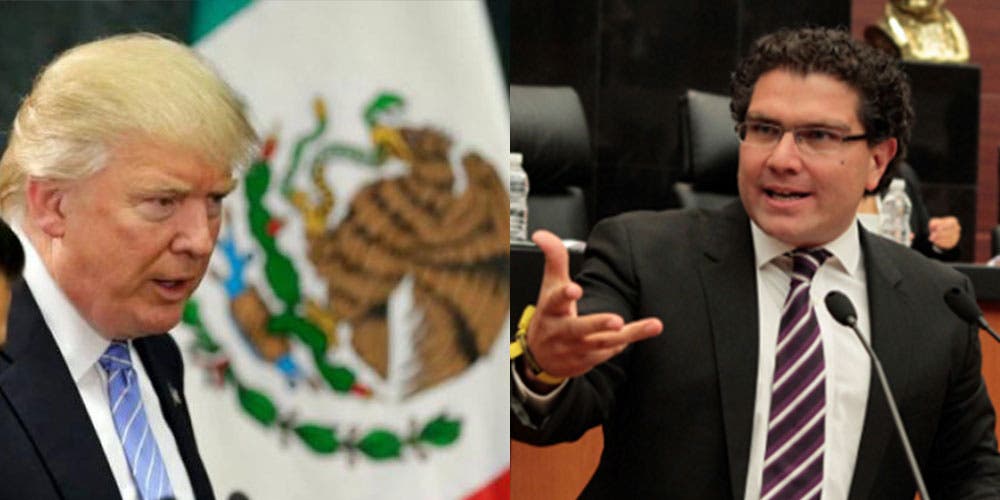 Mexican Senator Armando Rios Piter just announced new legislation to extend diplomatic protections to Mexican-Americans and his countrymen living in America without documentation. After reading the Trump regime’s “Contract with the American Voter,” Senator Ríos Piter is also fast tracking formal consideration of his anti-wall legislation, which will be heard next week in the upper house of Mexico’s legislature.

“Next week, we will introduce a new Special Law for the protection of Mexicans abroad,” Mexican Senator Armando Ríos Piter told me in an exclusive telephone interview, “by using our sovereign diplomatic missions to extend legal protection and provide social services.” His unique idea would defend civil rights by using consular immunity and the Vienna Convention’s protection from intrusion into consulates by host nations, to extend Mexico’s diplomatic rights to protect individuals in America from Trump’s plans for legalized discrimination by our country’s federal government in the post-Obama era.

“Mexico maintains 50 consular affairs offices spread across 25 states in the US, and our embassy is located in Washington, D.C. near the White House,” said Senator Ríos Piter who is passionate about protecting the civil rights of his countrymen on either side of the border. “The idea of this law is to shield our people from persecution, by using our American consulates, and our embassy, to extend the social safety net, no matter their migration status. As well, we will assist our countrymen to maintain their social investment in their current community.”

There are over 35 million Mexican-Americans and 12 million of that total are first-generation immigrants living in the United States.

“On September 6th, I introduced a bill to defend our country against probable hostile actions by Trump,” said Sen. Ríos Piter, “I’m asking the Foreign Affairs Committee of the Senate to push forward with their consideration of the anti-wall bill next Tuesday, because he’s proposing to end NAFTA, an act regarding “illegal” migrants and saying that Mexico is going to pay for the wall in his first 100 days. Now that Trump won, it is absolutely urgent to pass the bill, and make it a reality as soon as possible.”

That legislation would take measures to prevent Mexico from ever paying for a wall, and require formal review of all treaty obligations to America if NAFTA is violated, specifically focusing on costly post-9/11 security cooperation agreements and provisions to ensure that financial transactions aren’t interrupted by our President-elect.

“We face great uncertainty, and no one knows what Trump will do or is capable of doing,” said Senator Ríos Piter, “therefore we need to make sovereign, fast and forceful decisions. The message I am sending today to President Enrique Peña-Nieto, is that he should be consulting with all of his elected legislators, to analyze how to best deal with this first 100 days announcement from President-elect Trump.”

The Senator released a prepared statement outlining the final form of his legislative proposal to thwart Donald Trump’s central campaign promise before he ever obtains the government authority to start making it happen:

First, if the United States decides to withdraw from NAFTA, as he mentions on: “Donald Trump´s Contract with the American Voter”, we will have to review all the treaties and agreements we have with the USA, including all the treaties we have on Security Matters, where Mexico works very hard covering the back of our neighbor.

Second, if the American Government decides to expropriate the remittances of our fellow Mexicans, will have to do the same with American transactions and will recover the same amount on equal proportion.

And thirdly, not $1 Mexican Peso of Mexicans will be used to build a wall or any infrastructure that goes against Mexican interests.

It’s clear that the world received the news of a Trump regime in the United States with apprehension. We should expect more pre-emptive anti-Trump legislation and initiatives by America’s allies and neighbors in the next seventy days before President Obama is scheduled to depart the White House.

“What our fellow Mexicans who live in the United States want is to work honestly and live in peace, with the certainty that their families won’t be torn apart and they won’t lose their incomes,” said Senator Ríos Piter, “We will work to build a proposal to deal in diplomatic terms with these challenges.”