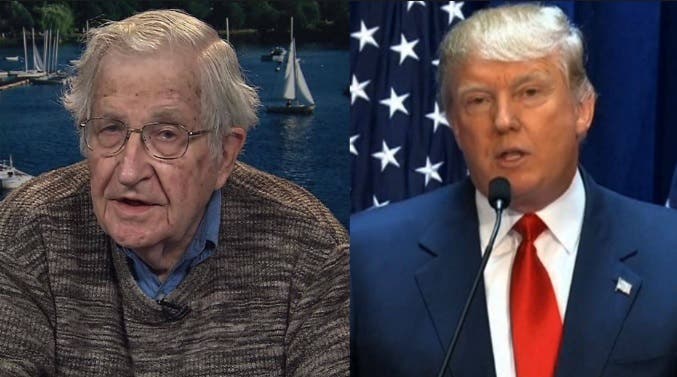 World-famous political theorist Noam Chomsky did not mince his words when it came to his thoughts on Donald Trump’s shocking electoral victory last week. “On November 8, the most powerful country in world history, which will set its stamp on what comes next, had an election. The outcome placed total control of the government — executive, Congress, the Supreme Court — in the hands of the Republican Party, which has become the most dangerous organization in world history.”

Focusing on the clear and present danger that this nihilistic Republican Party poses to the environment and thus to human civilization as we know it, Chomsky spoke on another piece of news that occurred on November 8th, one entirely lost in the wake of Trump’s historic upset.

The most important news of November 8 was barely noted, a fact of some significance in itself.

On November 8, the World Meteorological Organization (WMO)…reported that the past five years were the hottest on record. It reported rising sea levels, soon to increase as a result of the unexpectedly rapid melting of polar ice, most ominously the huge Antarctic glaciers. Already, Arctic sea ice over the past five years is 28 percent below the average of the previous 29 years, not only raising sea levels, but also reducing the cooling effect of polar ice reflection of solar rays, thereby accelerating the grim effects of global warming. The WMO reported further that temperatures are approaching dangerously close to the goal established by COP21, along with other dire reports and forecasts.

On that same day, the American people handed full control of their government to a Republican Party intent on burning every last ounce of coal and plundering the grounds for every dollar of black gold to be found, no matter the cost to the environment or the public’s wellbeing.

“The winning candidate, now the president-elect, calls for rapid increase in use of fossil fuels, including coal; dismantling of regulations; rejection of help to developing countries that are seeking to move to sustainable energy; and in general, racing to the cliff as fast as possible. It is hard to find words to capture the fact that humans are facing the most important question in their history — whether organized human life will survive in anything like the form we know — and are answering it by accelerating the race to disaster.”

Chomsky has been warning of the possibility of a leader like Trump arising from from the swamp for several decades, and points to the failure of neoliberalism on the part of both halves of the American political system – but points out that Trump is not going to be the solution to the woes of the white working class – the opposite in fact.

For many years, I have been writing and speaking about the danger of the rise of an honest and charismatic ideologue in the United States, someone who could exploit the fear and anger that has long been boiling in much of the society, and who could direct it away from the actual agents of malaise to vulnerable targets.

The Republicans have moved so far toward a dedication to the wealthy and the corporate sector that they cannot hope to get votes on their actual programs, and have turned to mobilizing sectors of the population that have always been there, but not as an organized coalitional political force: evangelicals, nativists, racists and the victims of the forms of globalization designed to set working people around the world in competition with one another while protecting the privileged and undermining the legal and other measures that provided working people with some protection, and with ways to influence decision-making in the closely linked public and private sectors, notably with effective labor unions.

Trump supporters, who are led to believe that Trump will do something to remedy their plight, though the merest look at his fiscal and other proposals demonstrates the opposite — posing a task for activists who hope to fend off the worst and to advance desperately needed changes.

We should have paid more attention to the warning signs, from Chomsky’s own predictions to all the red flags that seem so clear with hindsight. The consequences of this election cannot be understated, and we will have to live with them forever.