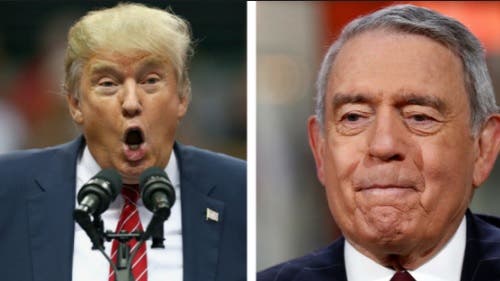 Legendary reporter Dan Rather, who has recently set his journalistic sights on America’s Trumpist decadence, has written a powerful guest blog for Scientific American demanding a re-evaluation of America’s scientific priorities. As Rather notes, the complete absence of climate change and other crucial scientific issues from the presidential campaign “marks a singular failure of the press and the political class.” This omission of scientific debate is “indicative of a much broader systemic rot” in which pervasive anti-intellectualism has turned the acceptance of scientific truth into a partisan position.

Rather argues correctly that “governmental support of the pure pursuit of knowledge through basic research is one of the defining symbols of American excellence,” but Donald Trump has throughout his campaign shown a remarkable disdain not just for the science of climate change and the millions it will kill but for the scientific process in general. In the post-truth political arena Trump and his GOP brethren have erected, there is no need for the rigorous application of scientific methods to solve America’s problems, much less the acceptance of basic facts.

But it doesn’t have to be this way. Scientific innovation has of course been central to America’s development as an economic powerhouse and a reinvestment in the sciences as “a way to rebuild America’s agriculture, manufacturing, and technology sector for the benefit of all” dovetails with Trump’s nationalist message and his railing against economic malaise.

Instead, it appears that Trump will take the coward’s route and base his policies on the whims of an anti-intellectual population inflamed by demagogic pronouncements that somehow link science with the nebulous yet treacherous “liberal agenda.” Indeed Trump has backed up the anti-environmental rhetoric of his campaign by appointing Myron Ebell, a prominent climate change denier funded by Exxon and Koch Industries, as the transitional head of the EPA.

Rather reserves some of his critique for the media and its treatment of science as a niche issue. Instead he calls for “sustained and improved partnerships between the press and the scientific community” and “experimentation on form, tone, content, and distribution” so that news of scientific advancements in any field can reach the largest audience and have the greatest effect in shaping policy and politics.

He concludes his honorable article with a powerful appeal to reason and a plea to put facts, truth, and science above political maneuvering and demagogic jingoism:

I firmly believe science to be of the utmost importance to the world that I want my children and grandchildren to inherit. I believe it is a way to connect different groups, nations, and generations. I believe that scientists have more power in the public marketplace of ideas than they may realize. I refuse to believe that the moral weight of fact-based research has no place in what can seem like a post-truth era