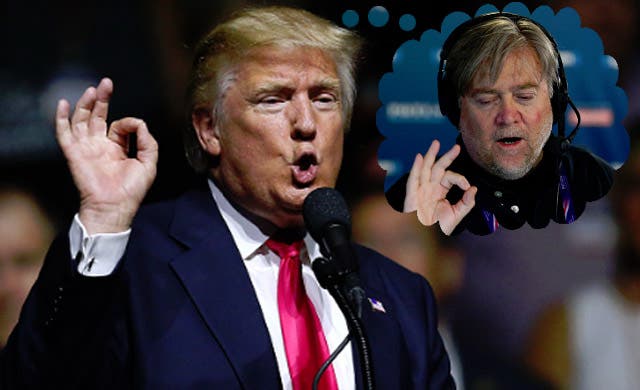 Donald Trump recently named prominent white nationalist Stephen Bannon, his former campaign chief, “chief strategist and senior counselor” of his White House team. The appointment represents an infiltration of white supremacism into the highest levels of government that has not been seen since the pre-civil rights era.

Despite Trump’s constant fantasies of collusion between the “mainstream media” and the Democratic Party, Bannon, who has been an integral part of Trump’s team all along, is the head of the far-right news site Breitbart.

Even worse than Trump’s co-optation of the fourth estate, however, is the character of the man he chose to do so. Bannon’s Breitbart has become, in his own words, “the platform for the alt-right,” the movement of far-right online white supremacy that has gained so much attention this campaign. Bannon is a prominent admirer of Richard Bertrand Spencer, the bigoted white ultranationalist who coined the term alt-right and has become somewhat of a sage for the movement while advocating “peaceful ethnic cleansing”. The Anti-Defamation league has called him “a symbol of the new white supremacy” and the SPLC labeled him “a suit-and-tie version of the white supremacists of old.” Bannon himself has reportedly said, rather paradoxically, that the only difference between himself and skinheads is “intelligence.”

Indeed the alt-right is a strange phenomenon. Driven by everything from racial hatred to sexual frustration, the amorphous online movement calls for ethnic cleansing to stave off a “white genocide,” believes liberals are engaged in a clandestine war to eradicate freedom of speech – which in their minds equates largely to freedom to harass women and insult minorities –  and grants equal ideological weight to the Syrian civil war (in which they support the genocidal Bashar al-Assad and his Russian backers) and internal video game politics.

Now, one of the leaders of this bigoted “new white supremacy” will literally be a leading figure in the White House. Even hardline conservatives like Glenn Beck and Ben Shapiro have denounced the white nationalism of Bannon and Spencer as “shot through with racism and anti-Semitism,” but a fundamental respect for human dignity no longer seems to be a prerequisite for occupying the highest office in the land.

Sure enough Trump’s election has been greeted with euphoria from white supremacists around the country, with endorsements coming pouring in from the KKK and other hate groups. Speaking of Trump, Spencer himself said “He’s fighting for us. He’s saying we’re going to be great again. We’re going to win again. And there’s this implicit identity to this. There’s this implicit nationalism. I think he’s evoking a lot of feelings amongst people, and I think implicit in what Donald Trump is doing is a conception of America as a European country.”

When such openly and proudly bigoted people are being chosen to run the country, it is no surprise that oppressed communities nationwide are genuinely frightened for their safety. The hundreds of hate crimes committed in the days since Trump’s election (an even worse increase than after 9/11) give an even stronger impetus to fight back against the agents of fascism that no longer lie dormant in the American body politic. We as a nation are truly entering new and dangerous territory, and we need to do everything we can to resist and stand up for human rights.