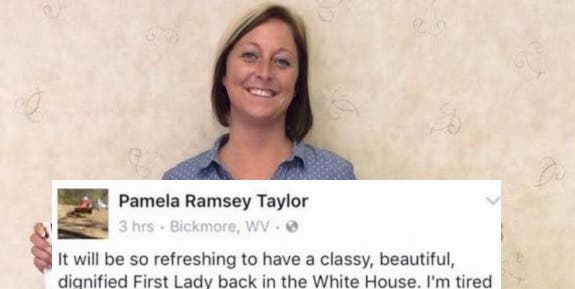 “It will be refreshing to have a classy, beautiful, dignified First Lady in the White House. I’m tired of seeing an ape in heels” she wrote on Facebook in a now-deleted message that has been replaced with a cursory and insincere apology, according to WSAZ News.

Beverly Whaling, the Mayor of Clay, responded to the post saying “Just made my day Pam.”

An online petition has now racked up over 2,000 signatures demanding that both women be fired, prompting Taylor to “file a lawsuit against individual(s) who have slandered her” as she complains that there is now a “hate crime against me.”

This is the ultimate irony of the anti-“political correctness” crusader – they say something horrendously racist and then feel victimized when they have to face consequences for their actions. Despite what the electoral college victory of Donald Trump might say, America is not a nation where this kind of talk is acceptable, and raising hell over even small incidents like this are critical in the fight against the normalization of racism and bigotry.