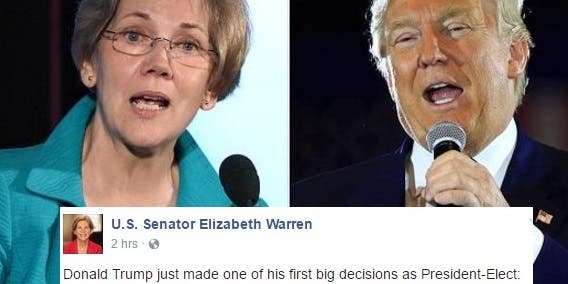 Donald Trump just made one of his first big decisions as President-Elect: appointing Steve Bannon as his Chief Strategist and Senior Counselor. Bannon is a man who has promoted white nationalism as the head of Breitbart News – a website that regularly publishes racist, sexist, bigoted ideas in articles with headlines like “Birth Control Makes Women Unattractive and Crazy,” “Would You Rather Your Child Had Feminism or Cancer?” and “How Muslim Migrants Devastate a Community.”

He told his ex-wife that he didn’t want their daughters going to school with Jewish children, and described progressive women as “a bunch of dy***.” This is a man who encourages hate, has been praised by supporters of the KKK and Nazi Party, and has been denounced by civil rights organizations like the Southern Poverty Law Center and the Anti-Defamation League.

The President of the United States should condemn bigots – not give them a West Wing office and empower them to make decisions about the future of our country. Donald Trump claims he wants to be a “President for all” Americans. But Bannon’s appointment shows that so far President-Elect Trump is embracing the same kind of ugliness and divisiveness as he did throughout his campaign.

Other headlines from Breibart include “Planned Parenthood’s Body Count Up To Half A Holocaust, Would You Rather Your Child Had Feminism Or Cancer, The Confederate Flag Proclaims A Glorious Heritage,” and “Bill Kristol: Renegade Jew.”

Steve Bannon is a white supremacist whose appointment was loudly hailed by neo-Nazis and Ku Klux Klan groups, who themselves were shocked that Trump was actually going through with it. “I must admit that I was a wee bit surprised that Mr. Trump finally chose Mr. Bannon, I thought that his stable of Washington insiders would have objected too vociferously. Perhaps The Donald IS for ‘REAL’ and is not going to be another controlled puppet directed by the usual ‘Wire Pullers,’ and does indeed intend to ROCK the BOAT? Time will tell” wrote Rocky J. Suhayda, the head of the American Nazi Party.

It would appear that Donald Trump is very serious about his agenda of racism and bigotry, and we should all be up in arms over the appointment of an anti-Semitic domestic abuser to the Trump Administration.