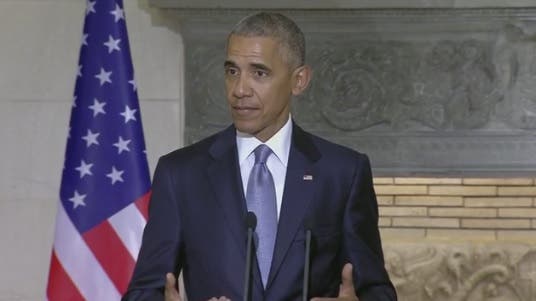 The Army Corps Just Shut Down Construction Of Dakota Pipeline

President Obama spoke out today against President-elect Donald Trump’s shocking electoral college, calling him out for mobilizing people with “troubling” rhetoric that’s being echoed by Republican officials, media, and  that was “not necessarily connected to the facts.”

While “entirely divorced from reality” is more appropriate, he is still our President for now and must maintain a facade of support for our new misogynist-in-chief. Obama went on to criticize Trump for exploiting the “anger and fear” that Americans feel about globalization, which he “wrapped up in issues of ethnic identity or religious identity or cultural identity. And that can be a volatile mix.”

Time and time again, human history has shown that economic anxieties exacerbated by ethno-nationalist scapegoating by populist leaders leads to discrimination and repression. If left unchecked, it leads to genocide. The world stood by and watched crackpot dictators and deeply divided societies commit unimaginable atrocities in Nazi Germany, Rwanda, Armenia, and Bosnia. Now the foundations for the newest round of ethnic cleansing is being laid across the world as far-right fascists take power in the United States and across the European Union.

While nobody is saying it’s going to happen here, there have been over 200 hate crimes committed in the United States since Donald Trump was elected- more than the past six months combined. The warning signs are all here – and we as a people must be vigilant and stand up for our minority populations in the face of unrepentant racism and bigotry.