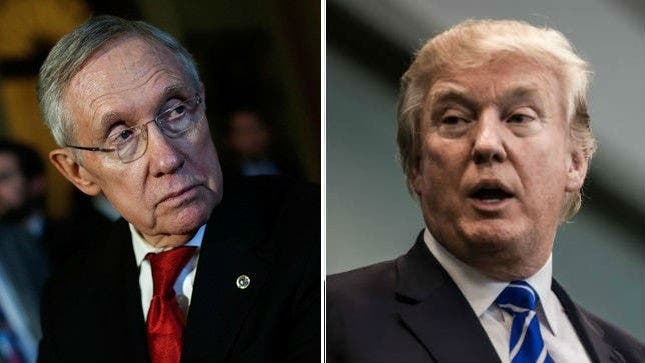 Outgoing Democratic Senate Minority leader Harry Reid (D-NV) just demolished the Republican President-elect on the Senate floor today, calling out Trump’s choice of the racist alt-right leader Stephen Bannon as his Senior White House advisor. The Senator from Nevada took the President-elect to task not only for a horrifying first official hire but also for retreating behind his Twitter account during the ensuing media firestorm as white nationalists celebrated. Reid said:

Talk is cheap and tweets are cheaper. So far, rather than healing these wounds, Trump’s actions have deepened them. His first official act? He appointed a man seen as the champion of white supremacy. According to CNN—and I quote—“whites nationalist leaders praise Donald Trump’s decision to name Stephen Bannon as his strategist.” In the same article, white nationalists say they see Bannon as an advocate for policies they favor.

When asked to comment on Bannon’s hiring, [former Ku Klux Klan Wizard] David Duke told CNN, “I think that’s excellent.” A court filing stated that Bannon said, again another quote, “he doesn’t like Jews and he doesn’t like the way they raise their kids to be whiney brats and he didn’t want his girls to go to school with Jews,” closed quote. That’s a court document.  By placing a champion of white supremacist a step away from the oval office, what message is Trump sending the young girl who woke up in Rhode Island afraid to be a woman of color in America? It’s not a message of healing. If Trump is serious about seeking unity, he should rescind his appointment of Stephen Bannon.

Donald Trump will have to learn to live with a great many televised speeches by Congress like the one delivered by Senator Reid today. That’s because our Constitution has a special free “Speech and Debate clause” for American members of Congress, which makes it generally legally impermissible under nearly all circumstances to silence legislators. Members of both Houses of Congress enjoy a level of free speech protection well beyond the First Amendment which protects citizens rights to freedom of press, freedom of religion, free assembly and to protest our government, so lawsuit-happy Trump will have to find another way to squash the dissent against him in the legislature.

Senator Reid is finishing his 30th and final year in Washington, and his forceful speeches on the Senate floor would be missed at any time.

If Trump is serious about seeking unity, he should rescind his appointment of Steve Bannon. Rescind it. Don’t do it. Think about this. Don’t do it.

As long as a champion of racial division is a step away from the Oval Office, it will be impossible to take his efforts to heal the nation seriously. I say to Donald Trump, take responsibility. Rise to the dignity of the office, the president of the United States. Stop hiding behind your Twitter account and show America that racism and bigotry have no place in the White House or in America.

There are only 65 days until President Obama steps down from office, and fewer than that until Democratic Senator-elect Catherine Cortez Masto succeeds Harry Reid to become America’s first Latina member of the Senate – one of the few victories Democrats won in their electoral rout last week.

Between now and then, it is imperative that the Democratic Party keep up the fight against all Trump transition plans and to craft a strategy to quash the creeping normalization of racism pushed by the Republican party’s designated future occupant of the highest office in the land.