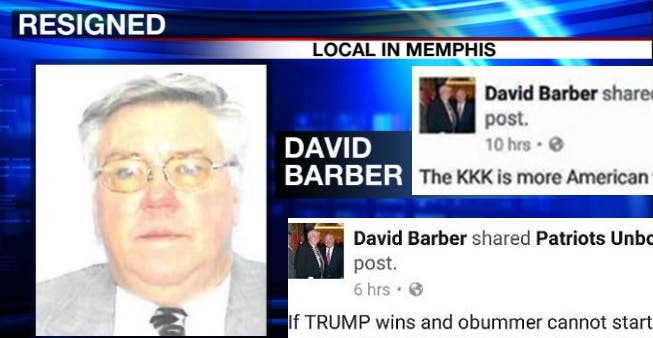 In the United States of America, we believe in the freedom of speech. We also, however, believe that while an individual is free to say whatever they like, that same individual is not free from the legal, fiscal, or social consequences of their speech. This is a lesson one Tennessee public official has learned the hard way after racist posts he made about on social media were uncovered and sparked outrage across the Internet.

The deputy director of Shelby County Corrections Center, David Barber, posted on his Facebook “The KKK is more American than the illegal president!” while sharing an article from an extreme right-wing news source “The Free Patriot” which included an image of President Obama and a KKK member wearing their signature pointed hood. 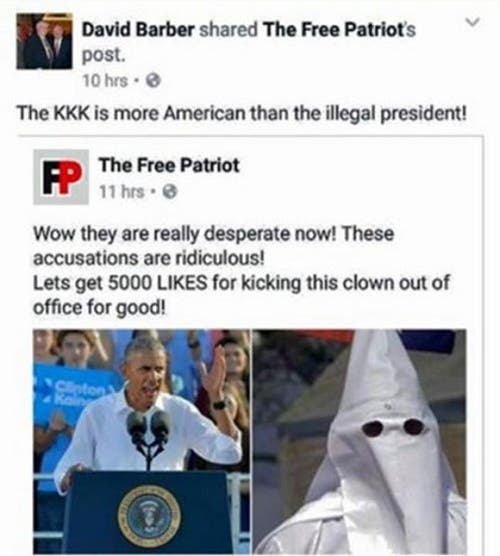 Barber shared another article from “Patriots Unbound” where he wrote, “If TRUMP wins and obummer cannot start martial law, he will run to his new mansion in thaArab world to hide. Hopefully the Muslims will eliminate him and mooshelle as queers.” 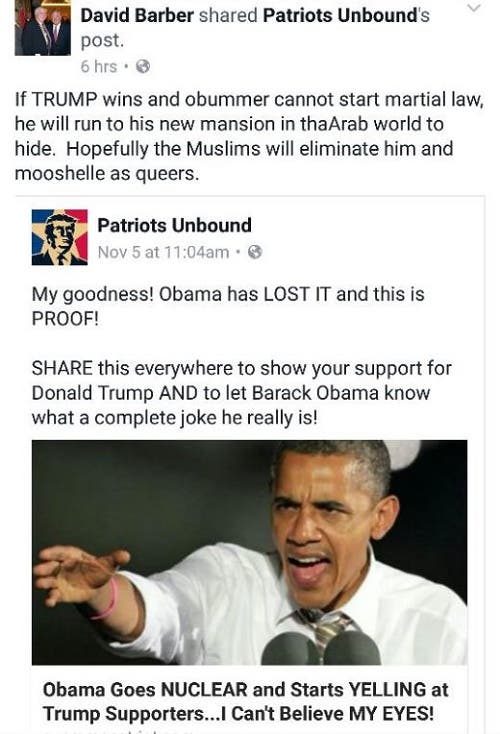 The posts by Barber were reported to his superiors on Friday, Nov. 11. Rather than immediately terminating Barber his boss, Shelby County Mayor Mark Luttrell, decided to fully investigate the incident before making a determination how to proceed. Luttrell said, “I was offended. I think anybody who read it would be offended. It was horrible. It was very offensive.” He went on to say of Barber’s attitude after he was confronted with his behavior, “He was very contrite, very apologetic. He recognized that he made a mistake. I don’t know why. That’s a question only he can answer.”

A mere apology was not enough to save Barber’s job and he voluntarily resigned four days later. Luttrell said that even after Barber apologized it was likely he was going to be fired anyway because government employees are held to a “high standard”, plus Barber’s Facebook page identified his employer. Luttrell did not mince words regarding Barber’s resignation:

This was an action by an employee who should have known better. What he did, his behavior was intolerable; it was offensive. We afforded him his rights and due process. He recognized his discretion and resigned.

A public official calling for the death of President Obama and his wife Michelle is unacceptable in any context, but Barber’s posts offer an insight into the deranged minds of those who supported Trump and helped him to obtain the Oval Office. While decrying Obama as a dictator they put a man in office who is far more likely to enact an imperial presidency.