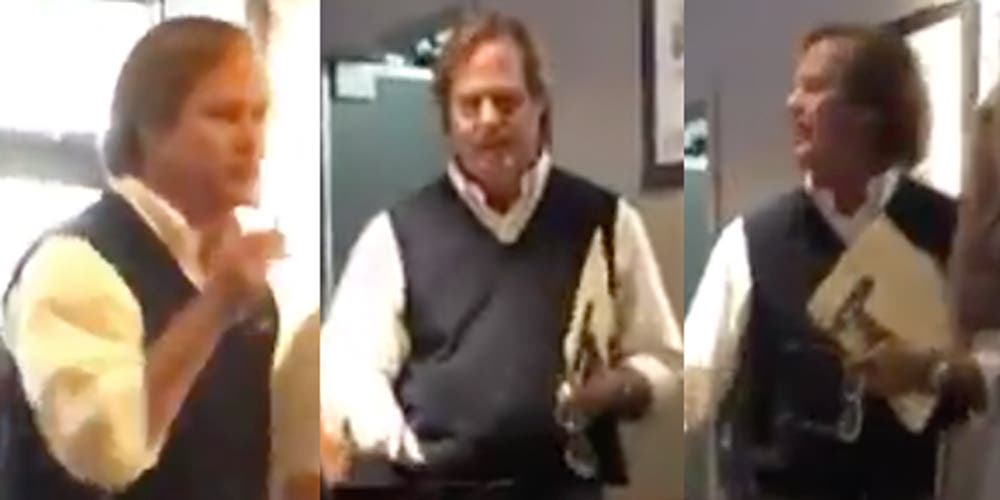 A Miami Starbucks was shaken up by the shrieks of a Trump voter on an insane, racist rampage. The citizen journalist who captured the scene told Miami New Times that the commotion alerted him to record the scene because it was getting ugly:

“He said it was ‘anti-white discrimination,'” Cárdenas says. “So he started disparaging the staff. One patron called him an asshole, so he said ‘Fuck you, bitch.’ That’s when I started filming.”

In the video below, you can see the white male Trump voter angrily demanding his money back before screaming at a black Starbucks employee that “you’re trash… because I voted for Trump. For TRUMP!”

“So what?” asked the Starbucks employee as the Trump voter walked from the pickup area to the cash register, his girlfriend in tow chuckling to herself.

That’s when he played a Trump race card, yelling to the stunned crowd, “She did discrimination against me. Ok.”

One of the Starbucks patrons asked the angry Trump supporter to treat the Starbucks employee with respect and tone down his verbal tirade, leading to an even louder, one minute lecture lecture about using foul language — from the man who voted a pussy grabber into America’s highest office.

The aggrieved Trump supporter spent the next minute yelling at a man in the back of room that he would, “punch you out.”

It was of course, an empty threat.

The Trump supporter kept posturing until the crowd stopped feeding his pity party for one with attention for his tantrum, whereupon he called the man he wouldn’t ‘punch out’ a “scumbag” and demanded his money back one more time.

The poor, berated Starbucks employee said, “Sure, it’s never been this complicated before.”

Less than two minutes later, it was over, and the lunatic Trump supporter put on his glasses and walked out in a huff, saying it was “absolutely ridiculous, let’s go.”

Just another day in Trump’s America.