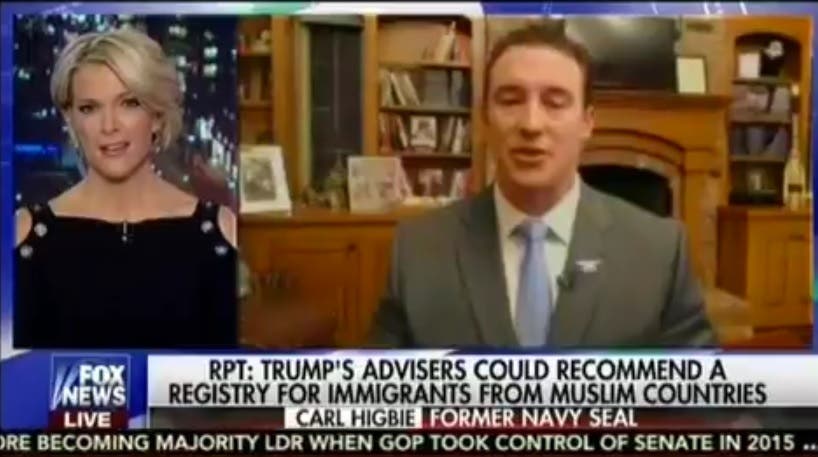 Trump surrogates are already invoking one of America’s most disgraceful war crimes as a precedent for what President-elect Donald Trump is planning to do to American Muslims. On the Kelly File tonight, Carl Higbie, the head of the pro-Trump Great America PAC, cited the rounding up and imprisonment of Japanese-American citizens during the Second World War as a “precedent” for President-elect Donald Trump’s plans to register and monitor Muslims citizens.

“Come on. You’re not proposing we go back to the days of internment camps, I hope. You know better than to suggest that. That’s the kind of stuff that get’s people scared” said Megyn Kelly nervously, as if she herself, an anchor at FOX News, is hearing things she is extremely uncomfortable with.

“I’m just saying there is precedent for it, and I’m not saying I agree with it, but…” replied Higbie before Kelly cuts him off and says “You can’t be citing Japanese internment camps as a precedent for ANYTHING the President-elect is planning to do.”

The forced relocation and imprisonment of over 120,000 people, the vast majority of them citizens, during the height of the Second World War was one of the most shameful and horrifying decisions our country ever made, during the worst conflict the world has ever known.

What’s really worrying about this clip is the casual ease with which this smug douchebag Carl Higbie brings up the pain and suffering of hundreds of thousands as “a precedent” for what they are planning to do to Muslim-Americans. One does not lightly invoke such an appalling stain on our nations history, but he threw it out there like a zinger at the dinner table, even smiling to himself as Megyn Kelly grew more and more upset at his words.

It looks like these Nazi punks are here to stay.