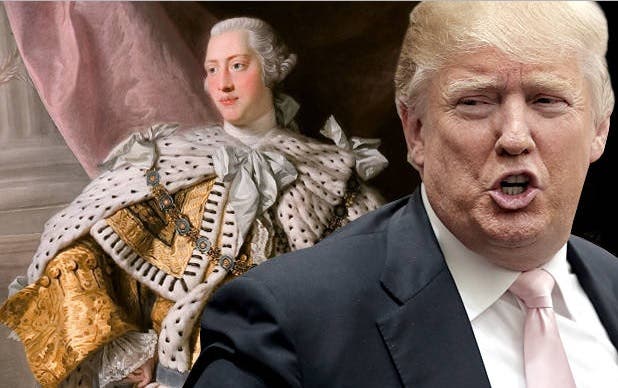 Trump Says He Kept Ford Plant In Kentucky. It Was A Union Contract

America is now facing the nightmare scenario of a racist demagogue assembling his administration to take over the White House. But is all hope lost? Michael Singer, Mayor of Charlottesville, Virginia, and author of “Demagogue: The Fight to Save Democracy from Its Worst Enemies,” sat down with Time Magazine to explain how American founding father Alexander Hamilton foresaw the possible rise of a tyrant in America, which is precisely why he and our founding fathers created the Electoral College as a safeguard against dictatorship.

Michael Singer’s column is both a civics lesson and the first draft of history upon which we can look back and say, that the system failed if it selects Donald Trump. It serves as one final, rational warning with legal reason in coldly measured prose spoken to the electors and to America’s public. If our electors perform their duties wisely, their voting results will not mirror the popular vote in certain states.

His story entitled, “The Electoral College Was Created to Stop Demagogues Like Trump” says:

The Electoral College was designed to prevent a demagogue from becoming president. It serves two purposes. One of them is to give small states power as well as big states and the cities. The other is to provide a mechanism where intelligent, thoughtful and statesmanlike leaders could deliberate on the winner of the popular vote and, if necessary, choose another candidate who would not put Constitutional values and practices at risk.

In my book Demagogue: The Fight to Save Democracy from Its Worst Enemies, I define demagogues as meeting four criteria: first, they posture as a mirror of the masses, attacking elites. Second, they trigger great waves of emotion. Third, they use that emotion for political benefit. Fourth, they threaten or break established rules of governance.

Does the Trump phenomenon make more sense after reading those four criteria? Alexander Hamilton’s writing in the Federalist papers explains why the Electors will meet in their own states rather than Washington in just one month’s time, to make the most important decision of their – and our own – lifetimes. Under our Constitution and its 12th Amendment those votes will be directed to the President of the Senate, Vice-President Joe Biden who opens them in front of Congress.

Michael Signer also penned a major caveat about the terms that the media bandies about like “President-elect”, noting that they’re unofficial. That remains so until electors have spoken and Vice President Biden reviews the results in the presence of Congress, even though the popular voting is complete:

Since Nov. 9, Donald Trump has been described as our “President-elect.” But many would be shocked to learn that this term is actually legally meaningless. The Constitution sets out a specific hurdle for Trump to ascend to the presidency. And that will not happen until Dec. 19 when the members of the Electoral College meet in their respective states to vote for the President. It’s these electors who actually hold power under the Constitution to select Donald Trump as president. They should take that responsibility very seriously. They owe it to all Americans to deliberate on their choice in the manner required by the Constitution.

The fact is that the Electoral College was primarily designed to stop a demagogue—a tyrannical mass leader who preys on our prejudices—from becoming President.

Sadly, it’s apparent that our “objective” mainstream media is not considering the implications of Trump’s demagoguery, given how hard they worked to promote him, and is too swept up in his emotional roller coaster of the moment, refusing to point a reasonable finger at the dangers we face.

The electors were supposed to be statesmen. Even though recent years have seen a decline in statesmanship in America, they could be reborn this year. Statesmen truly have our greater good truly at heart, pursuing the broader purpose of America and calming the passions. If these men and women live up to that noble goal on Dec. 19, they will truly make American great again.

Signer notes that Hamilton’s Federalist Paper #68 provides clear reason for Electors to choose an alternative to the American demagogue to become our country’s next President. The American people has already placed the law and constitution ahead of their own innate desires, a demagogue pays sick tribute to “the people” by placing them – and himself – above the law, beginning as demagogues and ending as dictators.

“A dangerous ambition more often lurks behind the specious mask of zeal for the rights of the people than under the forbidden appearance of zeal for the firmness and efficiency of government.

History will teach us that the former has been found a much more certain road to the introduction of despotism than the latter, and that of those men who have overturned the liberties of republics, the greatest number have begun their career by paying an obsequious court to the people; commencing demagogues, and ending tyrants.

The Electoral College is America’s last hope, our only hope to remain a democracy in fact and not just on paper or in history books.

A petition asking the Electors to discharge their duty and to disregard the demagogue has become the largest ever petition launched on Change.org, and has over 4.4 million signatures.

More Americans chose Democratic nominee Hillary Clinton to be our next President than did Republican Donald Trump.

If we’re lucky, faithless electors will connect the dots between the man who would use the Oval Office to install the KKK’s greatest hero into the White House, and wisely recognize that he is the demagogue that our founding fathers warned about on October 27th, 1787.

Now that it’s been 229 years, hopefully the mainstream media will also get a copy of Hamilton’s “memo.”