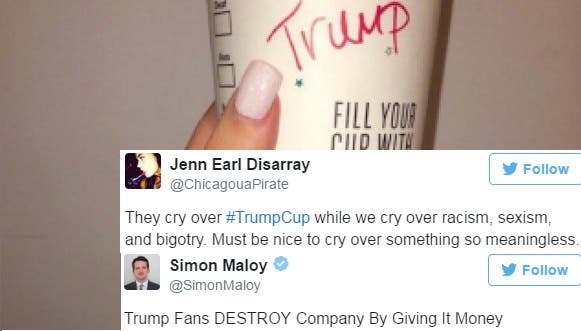 Starbucks cups are once again at the heart of an enormously petty and contrived grievance campaign by conservatives. Apparently upset that Starbucks CEO Howard Schultz supported Democratic nominee Hillary Clinton, Trump supporters have taken to “protesting” by writing TRUMP on all of their Starbucks cups.

While the stereotype of Trump supporters being uneducated and…on the less intellectually coherent side of things isn’t a particularly productive one, it must be said that it’s hard to see how purchasing products to scrawl a name on it is an effective protest.

The protest began after a Trump fan in Florida (of course) threw a tantrum after his order took longer than he thought it should have and thought he was being punished for being a Trump fan, because nothing is apparently more sensitive than a white conservative’s sense of oppression.

In desperate need of a safe space, Trump fans launched “Operation Trump Cup” (#TrumpCup) and are posting pictures of themselves with the cups with Trump written on them. What they are trying to accomplish is still unclear.

What they have achieved is ruthless mocking on social media.

They cry over #TrumpCup while we cry over racism, sexism, and bigotry. Must be nice to cry over something so meaningless. #WhitePrivilege

I sure hope all these #trumpcup supporters ordered cream-based drinks to suit the anti-brown mentality they support.