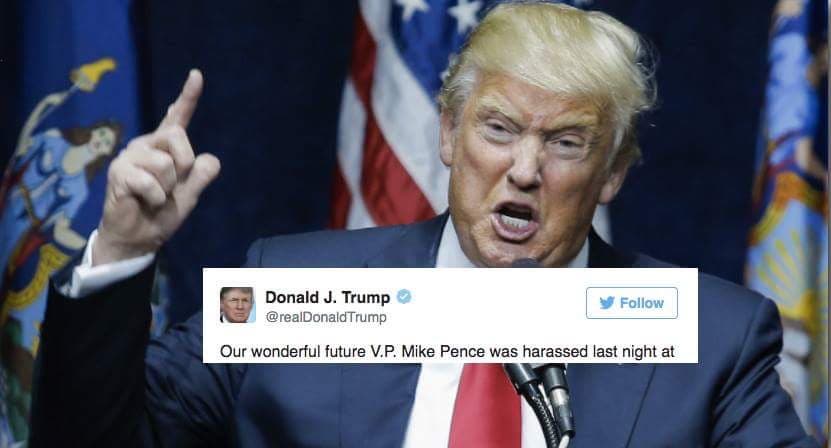 Trump Said Pence Was Harassed At The Theater. This Hamilton Actor’s Response Is So Classy

Americans just elected an insecure cyber-bully as President, and the early results are an unprecedented attack on free speech and hissy fit by Donald Trump on Twitter this morning. Last night, theatergoers booed Vice President-elect Mike Pence who went to watch the Broadway musical Hamilton. The musical ended with a touching speech (video below) by cast members, asking the Republican elected official to govern for all Americans.

“We, sir, are the diverse America who are alarmed and anxious that your new administration will not protect us, our planet, our children, our parents, or defend us and uphold our inalienable rights. We truly hope this show has inspired you to uphold our American values and work on behalf of all of us. All of us.”

The message was lost on its audience. Pence darted out of the theater during the cast statement and this morning President-elect Donald Trump took to Twitter and shamelessly attacked both the cast of Hamilton and the audience.

Trump woke up and launched his hissy fit.

The Theater must always be a safe and special place.The cast of Hamilton was very rude last night to a very good man, Mike Pence. Apologize!

Our wonderful future V.P. Mike Pence was harassed last night at the theater by the cast of Hamilton, cameras blazing.This should not happen!

Ironically, Hamilton is about America’s founding fathers, civics and the historic creation of a Constitution that protects individual rights – specifically the right of free speech.

Donald Trump is more than two months from assuming the role his predecessors defined as leader of the free world, and already he’s launching a frontal assault on free speech in America. If Trump thinks for a second that the presidency can shield him from criticism, it’s going to be a long four years for him.

Bravo Hamilton cast members and theatergoers for exercising your first amendment rights. Here is their statement to Mike Pence:

Tonight, VP-Elect Mike Pence attended #HamiltonBway. After the show, @BrandonVDixon delivered the following statement on behalf of the show. pic.twitter.com/Jsg9Q1pMZs