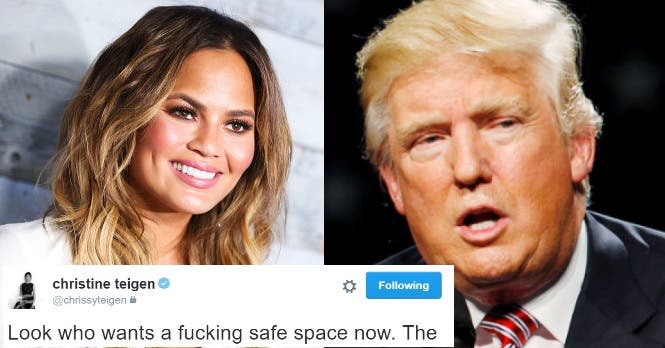 Last night, our potential Vice-President, Mike Pence, attended a performance of the hit musical Hamilton, where he was directly addressed by the cast. The actors and actresses politely implored him to represent all Americans, not just the white Christian straight males, and to uphold the American values that forged this nation.

“We are the diverse America who are alarmed and anxious that your new administration will not protect us, our planet, our children, our parents, or defend us and uphold our inalienable rights, sir. We hope this show has inspired you to uphold our American values and work on behalf of all of us” said the cast.

Trump, of course, interpreted this call to behave like a reasonable non-bigoted adult as an attack on his vice-president, and reacted like the spoiled brat he truly is, lashing out on Twitter at the cast:

The Theater must always be a safe and special place.The cast of Hamilton was very rude last night to a very good man, Mike Pence. Apologize!

Model and entrepreneur Chrissy Teigen, wife of music icon John Legend, vented her frustration in a tweet that perfectly nailed how the vast majority of the American people feels about the situation. The right-wing has made sport of mocking liberals for justifiably getting angry when right-wingers casually spout racial slurs, screaming “TRIGGERED!” like children who delight in the reactions of their parents when they curse and then complaining that we’re infringing their right to “free speech” when we respond negatively.

But for all their complaints that liberals are too sensitive, it’s conservatives that clutch at their pearls and fan away the vapors at the most pedestrian of perceived insults. From their ridiculous campaign against Starbucks over perceived discrimination to one poorly-behaving customer to their calls to “boycott” Hamilton, their sense of self-righteous indignation and self-entitlement is almost as overblown as Donald Trump’s ego.

She’s absolutely correct that this is a stunt to distract the world from Trump’s tacit admission of guilt in the Trump University fraud suit. $25 million dollars is quite a lot of money to pay out for a man who claims he did nothing wrong. Once again, Trump is exploiting the media and gaslighting the American people to disguise the fact that he’s nothing but a greedy con-man preparing to extort the nation like he did the poor students of Trump University.

Teigen wasn’t the only one to remark on the hypocrisy of Trump’s tantrum:

LMFAO yeah a black man respectfully demanding his rights be respected is JUST like the death threat I got yesterday https://t.co/VhmlsH6ztR

I love all these right wingers having unison hissy fits about Pence being booed. Yeah, they’re SO concerned about appropriate behavior.

Hamilton cast did not refuse Pence service. It’s not like he’s an LGBT person trying to buy a wedding cake in Indiana or anything like that.

Waaaa! The mean Hamilton cast spoke out politely and respectfully to Pence! Waaaa! Now the right is boycotting a sold out show! #HaGoodLuck

my favorite scene in hamilton is where the president elect has to pay $25 million for defrauding 6,000 college students