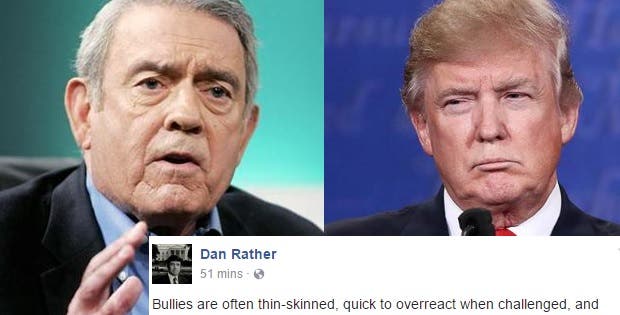 Legendary reporter Dan Rather took to Facebook today address the brouhaha surrounding Mike Pence’s attendance of the Hamilton musical, where the cast delivered a polite and powerful message to the religious extremist. Donald Trump, our potential president, embarked on a late-night tweetstorm in which he took cheap shots at the cast and complained about the mistreatment of his vice-president.

Rather had some extremely important points to make about Trump’s famously thin skin and his childish inability to let any slight, real or imagined, go unchallenged. Rather slammed him for being a “bully” and demanded that he begin even pretending to behave like a president should.

Bullies are often thin-skinned, quick to overreact when challenged, and undone when people are no longer afraid to speak truth to their face. Great presidents are almost always the opposite in all those categories.

Reflecting on Donald Trump’s complete overreaction to a statement made at the end of a performance of Broadway’s Hamilton: An American Musical, I couldn’t help but think – doesn’t this man have more important things to worry about? Hasn’t the theater long been a stage for political art? And isn’t this a man who broke so many norms as a candidate, insulted so many people – individually and as groups – that he now has the nerve to demand an apology when he never gave one himself?

I know there are many who say that this incident shouldn’t be blown out of proportion. Yes, when compared to cabinet posts or paying out $25 million in a fraud case against “Trump University,” a Tweet maybe might not seem that important. But being president is to have every word you utter scrutinized. And these words are intimidating and unfitting of the office of the presidency. But more importantly, they show a real weakness of vanity and small-mindedness that our enemies abroad will likely look to exploit. I can also imagine that Trump’s political foes at home are noticing – once again – how easily he can be rattled.

I imagine this is not the last we will see of these kinds of incidents.

Rather is absolutely right. Trump is supposed to be our president and he’s still behaving like a reality show contestant, using Twitter as his own private confession booth – but one that the whole world can see. America’s enemies from Raqqa to Moscow to Pyongyang are already celebrating Trump’s election, and unless he gets his act together – which, let’s face it, isn’t going to happen anytime soon – the leader of our nation will be the biggest threat to our own security and to our hard-earned position as a superpower.