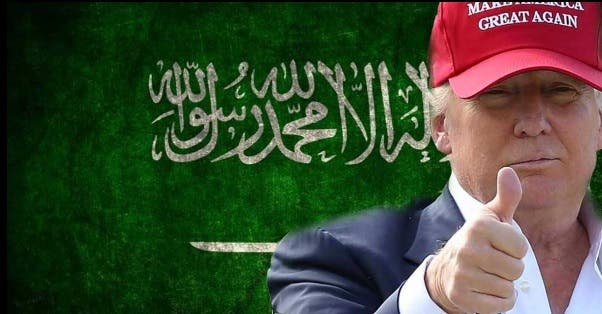 While President-elect Donald Trump was busy promising to register all Muslims and halt Muslim immigration to the United States, he was busy quietly registering eight new companies in Saudi Arabia during the Republican primary campaign, according to a new Washington Post report. Saudi Arabia’s extremist Wahhabi brand of Islam is the founding ideology of terorist groups like Al-Qaeda and Daesh (ISIS/ISIL), and they’ve dragged us into a war in yet another war in Yemen that nobody bothered to discuss during this year’s election.

This new report indicates that Trump was still listed as a principal figure in these newly discovered Saudi Arabian companies in his campaign’s May 2016 financial disclosures. All we know is that Republicans have voted for a man with a presumably ‘bigly’ plan to manage the issues by ‘protecting’ Saudi Arabia, to whom he sells condos:

In August 2015, as Trump’s presidential campaign began to take flight, Trump registered eight separate companies with names such as THC Jeddah Hotel and DT Jeddah Technical Services, financial-disclosure filings show. Their names followed a pattern set by Trump companies connected to hotel deals in foreign cities: in this case, Jeddah, the second-biggest city in Saudi Arabia. Four of those companies, in which Trump was named president or director, remained active at the time of Trump’s May financial filing. The disclosures do not provide more detail for the companies, and Trump representatives did not respond to requests for comment.

Trump’s global business conglomerate was revealed to have almost 250 companies currently registered in Russia for a variety of purposes, so it’s unsurprising that the President-elect would have more off-shore corporations in other autocratic states with diplomatic importance to America.

In fact, Donald Trump appears to have a far more substantial business portfolio and income stream from Saudi Arabia, that goes much further back than mainstream media deigned to report during the campaign.

Trump bought a mega-yacht in 1988 from Saudi arms dealer Adnan Khashoggi – the middle-man in the Iran-Contra scandal – and bragged about it on television. Later, Saudi Prince Alaweed bin-Talal bailed him out of both the yacht and other bad investments, before going on to become an early, long-term investor in Fox News.

Nonetheless, mainstream media remained fixated on the Clinton Foundation accepting money from the Kingdom to fund worldwide AIDS treatment and prevention. It was considered somehow proof of Hillary Clinton’s improper ties by the media. Meanwhile, Trump got more coverage for his speeches saying Hillary Clinton had done wrong than for his actual, factually documented and admitted ties to Saudi Arabia!

Trump’s direct business ties to Saudi Arabia since the 1980s, are rivaled in American and Republican politics by only the Bush family’s notably close relationship to the theocratic monarchy. Notoriously, the Bush family was so close with the Kingdom, that the Saudi Ambassador received America’s war plans to invade Iraq, before President George W. Bush even told Colin Powell in 2003.

Amazingly, Trump discussed his Saudi Arabian connections publicly at rallies, and his bragging about selling condos seems far more ominous now that we know a pay-for-play deal could lurk around any corner of the globe now:

On Aug. 21, the same day Trump created four of the Jeddah companies, he told a rally crowd in Alabama: “Saudi Arabia, I get along with all of them. They buy apartments from me. They spend $40 million, $50 million. Am I supposed to dislike them? I like them very much.” In January, a few months after the Jeddah companies were created, Trump told Fox News that he “would want to protect Saudi Arabia” from a potential Iranian threat but added that “Saudi Arabia is going to have to help us economically” and referenced the billions of dollars the Arab kingdom has made off the oil trade.

Even the conservative Wall Street Journal is urging Trump to sell his company immediately if he is going to be the President.

Ironically, former George W. Bush’s former-White House ethics lawyer Richard Painter says that the President-elect’s current plans to keep selling the Trump brand name creates a sure-fire violation of the “emoluments” clause of our Constitution, which Congress could use in an impeachment hearing.

Most mainstream media outlets have flatly ignored Trump’s business ties and potential for personal gain from the Saudi Arabian state, which benefits from higher oil prices, where they could pay any price for his brand name and a favorable policy, until now.

It’s already obvious that there is an odor of foreign influence circling Donald Trump’s time as President-elect due to his multi-national business ties. It opens the door for serious conflicts of interest, since the Kingdom of Saudi Arabia is the world’s largest sponsor of terrorism, having spent millions funding and arming groups like al-Qaeda and Daesh. The religious ideology behind groups like al-Qaeda and the Islamic State, Wahhabi Sunni Islam, is deeply entwined within the Saudi state and is the official religion of the Kingdom, and the Saudis work relentlessly to export their ultraconservative and inherently violent ideals of jihad to the rest of the world by using their money to fund schools and “charities” all over the world:

Those organizations have been hotbeds of anti-Western, and especially, anti-American, indoctrination. The schools, for example, not only indoctrinate students in a virulent and extreme form of Islam, but also teach them to hate secular Western values. They are also taught that the United States is the center of infidel power in the world and is the enemy of Islam. Graduates of those schools are frequently recruits for Bin Laden’s Al-Qaeda terror network as well as other extremist groups.

Saudi Arabia cannot be trusted as an American ally – but Trump wants closer relations so he can make a quick buck.

It’s yet another transgression that has our country’s founding father Alexander Hamilton rolling in his grave, as America plans to elevate a President with myriad foreign investments and business ties to autocratic regimes.