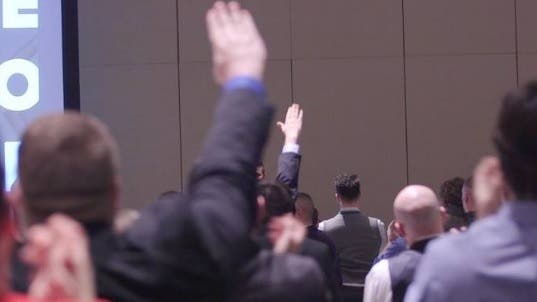 A new video has emerged of the white supremacy conference held this weekend in Washington D.C, and the footage is absolutely chilling. “Hail Trump! Hail Victory!” screams Richard Spencer. The words are the English translation of “Sieg Heil,” the notorious cry of the German Nazi Party, which orchestrated the systematic murder of over six million European Jews during the Holocaust. “For us, it is conquer or DIE!”

Spencer, the president of a white supremacy think-tank with the deceptively vague moniker of “the National Policy Institute,” went on to quote Nazi propaganda in its original German, referring to the Lügenpresse – “lying press” – which was an important Nazi concept used to demonize journalists and paint opposing opinions as the work of Jewish conspirators working to undermine the “will of the people.”

“America was until this past generation a white country designed for ourselves and our posterity. It is our creation, it is our inheritance, and it belongs to us” said Spencer, as the audience screamed in approval and arms went up stiff in the air, performing the Heil Hitler salute.

This is very serious and is certainly not hyperbole. Spencer himself has advocated for “peaceful ethnic cleansing” in the United States. Swastikas have appeared around the United States and now the salute is appearing in white supremacist meetings. Earlier this afternoon, an Nazi sympathizer was brought on CNN, who began to debate “whether or not Jews were people.” The mainstream media is working overtime to normalize this extremism, but it must be recognized for what it is – and it is terrifying.