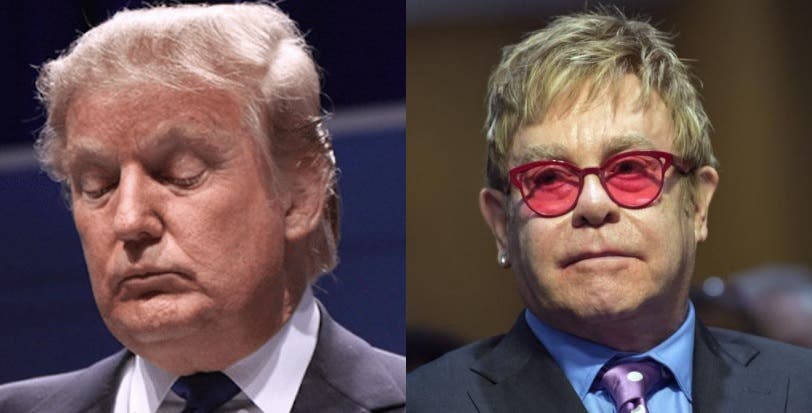 Donald Trump announced to America that he will be hiring legendary musician Sir Elton John to play at his inauguration this January, in a shameless attempt to pander to the LGBTQ community. “Elton John is going to be doing our concert on the mall for inauguration, which shows our commitment to gay rights.”

“This will be the first American president in US history that enters the White House with a pro-gay rights stance!” said Trump transition team executive Anthony Scaramucci, somehow without a hint of irony. Donald Trump’s potential administration is already shaping up to be one of the most virulently anti-gay administrations in recent history.

Donald Trump himself has always been against same-sex marriage and has said he would appoint judges who would overturn the landmark Obergefell v. Hodges Supreme Court ruling that legalized gay marriage in the United States. Trump’s vice-president, Mike Pence, is an anti-LGBT religious extremist who tried to divert federal HIV/AIDS funds to pseudoscientific “gay conversion therapy” and signed a bill legalizing discrimination against LGBTQ Americans in the state of Indiana. Trump’s choice for Attorney General, Jeff Sessions of Alabama, has the disgraceful distinction of being both an unrepentant racist and an outspoken anti-LGBT bigot.

So it is absolutely laughable that Trump is trying to paint himself as “committed to gay rights.” Elton John, a staunch Hillary Clinton supporter, must feel the same way, as his spokeswoman told CNN unequivocally that “he will NOT be performing at Trump’s Inauguration!”

John’s music was featured prominently at many of Trump’s rallies, (Trump is apparently a huge “Tiny Dancer” fan) which John spoke out against earlier this year: “I don’t really want my music to be involved in anything to do with an American election campaign. I’m British. I’ve met Donald Trump, he was very nice to me, it’s nothing personal, his political views are his own, mine are very different, I’m not a Republican in a million years. Why not ask Ted f*cking Nugent? Or one of those f*cking country stars? They’ll do it for you.”